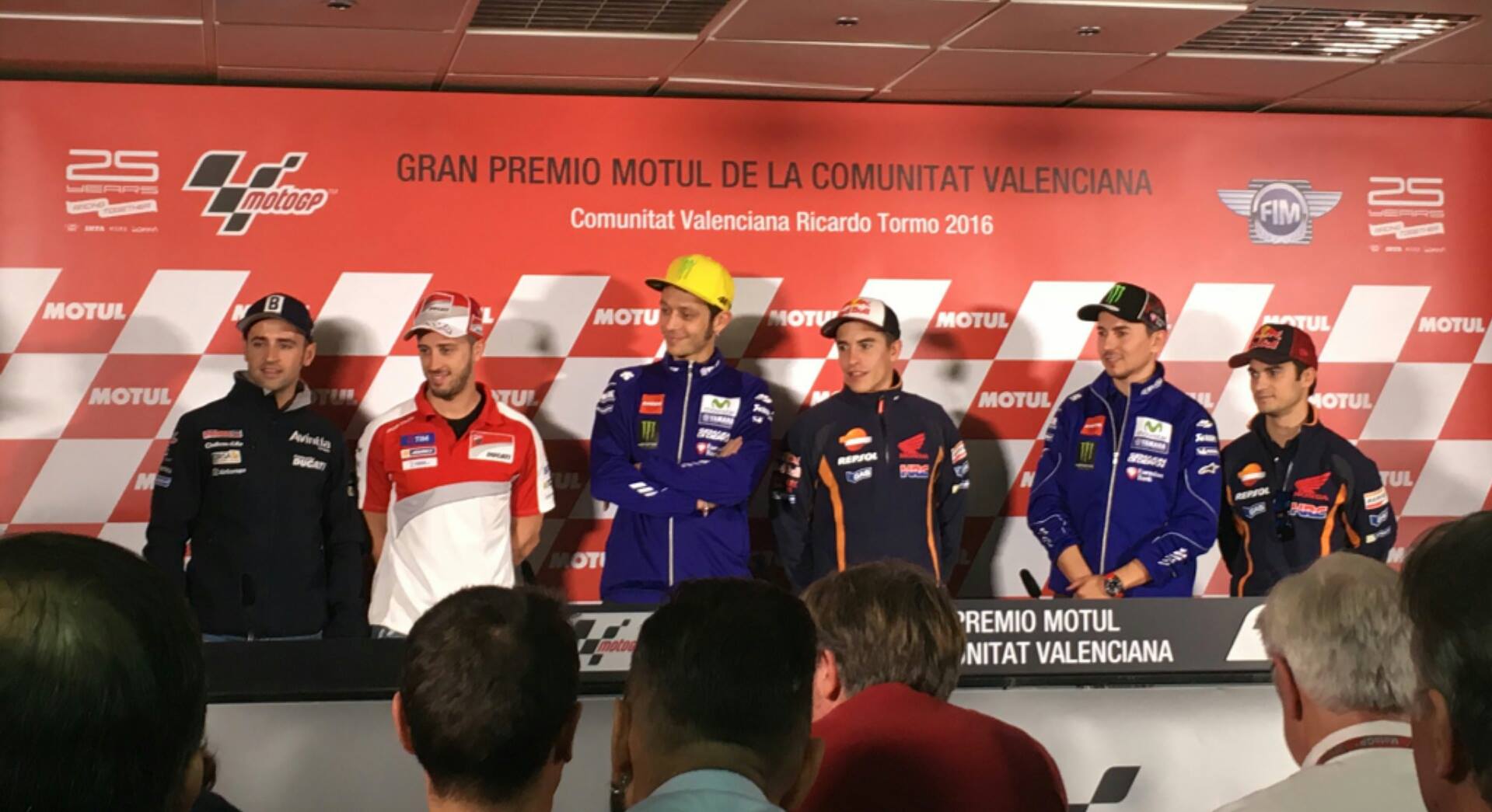 Here we are. 18th Grand Prix of the season. But also the last GP of an astonishing and surprisingly exciting Season... Here is what the Press Conference's boys had to say about that:

The Press Conference kicked off at the Circuit de la Comunitat Valenciana with a small ceremony to honour legendary Italian rider and 3-time World Champion Loris Capirossi, as CEO of Dorna Sports Carmelo Ezpeleta presented the Italian with a trophy to retire the number 65 from Grand Prix competition.

Then, Carmelo Ezpeleta gave each of the riders present from the 2016 MotoGP™ grid a memento to commemorate the anniversary of 25 years racing together in the long partnership between the FIM, Dorna, the MSMA and IRTA. Those present for the final roll call of 2016 were Repsol Honda Team’s Marc Marquez and Dani Pedrosa, the latter returning from injury, with Movistar Yamaha MotoGP pairing Valentino Rossi and Jorge Lorenzo, Hector Barbera (Avintia Racing) and Sepang winner Andrea Dovizioso (Ducati Team) completing the full line up for the final Press Conference of the year.

Reigning World Champion Marc Marquez was first to speak, looking to get back on top at home after seeing the pressure in the title fight removed – and then mistakes on the Sundays since. "These last two races weren’t the best way to celebrate the title! It seems I need some pressure to concentrate and finish, like when I was fighting for the Championship. But here is a circuit I like and I’ll try my best. The last two races haven’t been so good on Sunday but the performance was very good. Valencia is always great and this year no one has extra pressure, so everyone will push at 100%.”

Confirmed second in the standings after Sepang, Valentino Rossi is another looking for a win and free of pressure - but the track is one of those on which the Italian legend has sometimes struggled: “I want to try and win for sure, because the second half of the season wasn’t so bad and we’ve had a lot of good races but I’ve not been able to win. But here in Valencia is always difficult because it’s more tricky for me, so we need to work well and concentrate from tomorrow. I’m hoping for good weather, and to fight for the podium.”

His teammate Jorge Lorenzo has a fantastic record at the Circuit Ricardo Tormo, and the ‘Spartan’ has taken three victories at Valencia in the premier class – a good track from which to say goodbye to Yamaha as he prepares to move to Ducati. “It’s a mix of feelings,” said the 5-time World Champion of his last dance in blue. “I think about the present and the present is this weekend - finishing this long career with Yamaha as well as I can. I think we have a great chance to fight for the victory, or at least the podium. It’s strange because after so many things you suddenly switch – but little by little and step by step. First we concentrate on Yamaha, then after the race we think about the next bike.”

That next bike is the Ducati, with future teammate Andrea Dovizioso fresh from making history last time out in Malaysia as the ninth different winner of the year. ‘DesmoDovi’ is encouraged by the latter half of the season – and as well as another good result in the race on Sunday, is focused on finishing the season positively. “In the past this hasn’t been the best track for us, but on the last three – all different tracks – we were quite competitive. I think the tyre will make a big difference to the competitiveness of the bike. The two victories from this year are very important to Ducati, but so is having a good final half of the season – to begin next year with a good feeling. We’ve made a step and we’re closer to Yamaha and Honda. We still need something but we’re closer.”

The Desmosedici machine that Dovizioso feels is getting closer to a Championship contender is the one that Avintia's Hector Barbera recently experienced in Motegi and Phillip Island as he subbed for injured Andrea Iannone at the Ducati Team -  and is the bike Barbera will be on next season at Avintia. “This is my best season in MotoGP™ and I’m very happy. I’ve finished in the top five twice and last time out I was P4. I think we’ve worked hard and we’ve changed a lot about the bike. It was impossible to make the most of the factory rides over such a short time but it’s clear that the bike is much better, and it will be what I’m riding next year.”

Returning Dani Pedrosa missed out on his chance to take victory in any of those flyaway races, as the rider from Sabadell suffered a highside crash in Motegi – and broke his collarbone. But the 3-time World Champion is back at Valencia, as yet unsure how it will feel on the bike but passed fit to try and ride – with the best record at the venue of any of his contemporaries over all classes. “Now, it’s already feeling a lot better,” explained the Repsol Honda rider. “The first two weeks were the hardest because of the collarbone. Looking at the crash and how it happened I think I came out of it ok, because it was quite big. I’m happy to be here and try tomorrow, to see how the feeling is. I’m not feeling super strong but I hope to ride – at least the track is mostly to the left so I hope that can help a bit."