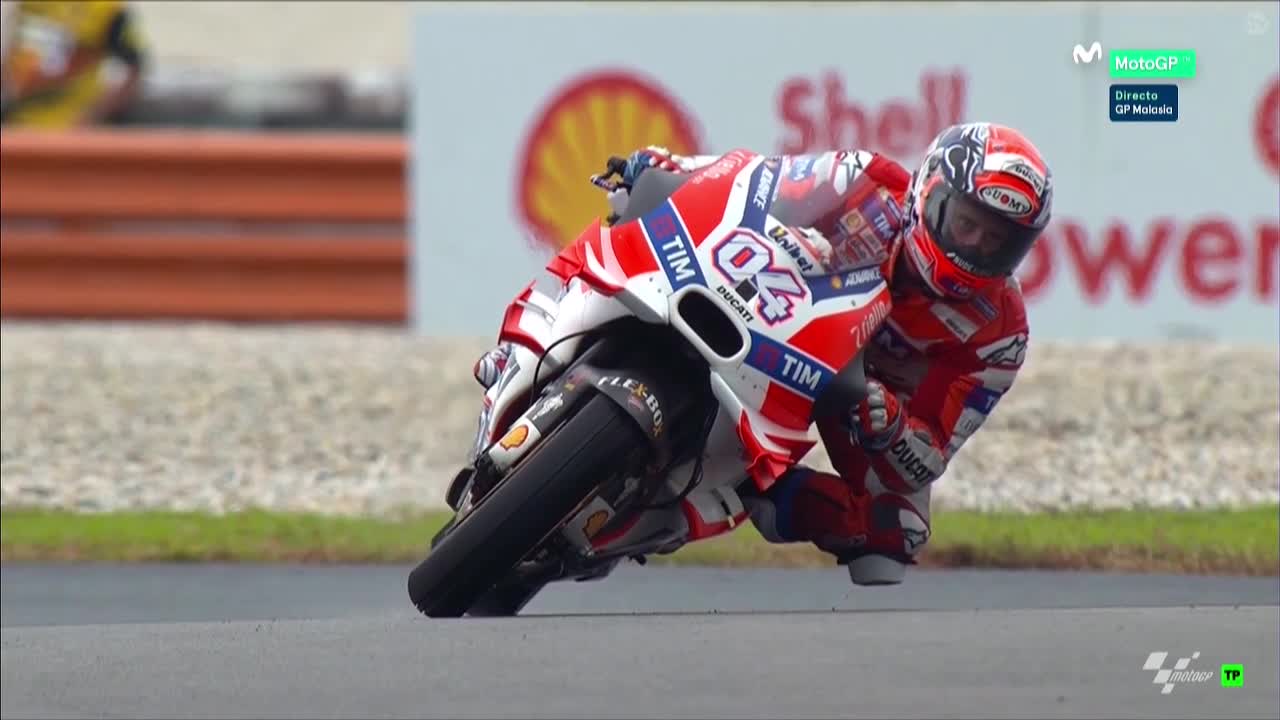 Andrea Dovizioso (Ducati Team) has taken a stunning pole position at Sepang International Circuit, as the Italian veteran sliced half a second off the time at the top and remained unthreatened. Compatriot Valentino Rossi (Movistar Yamaha MotoGP) took second on his final lap, just edging out teammate Jorge Lorenzo.

Dovizioso came out fighting near the start of the session, and set what was an unthreatened provisional pole position laptime on only his second attempt – before being the only man able to beat that as he later took another few hundredths off. Rossi suffered a small moment around Turn 1 in the session, before gathering it back in to go for another attack and just take second on his final run.

Lorenzo, who has struggled in 2016 getting the Michelin wet front tyre to work for him, put in a stunning show in the difficult conditions to not only duel with teammate Rossi, but qualify on the front row in conditions that have proved more difficult for the Mallorcan this season.

Reigning World Champion Marc Marquez (Repsol Honda Team) heads the second row as he struggles with illness and isn’t quite 100%, with Cal Crutchlow (LCR Honda) crashing out as he pushed to move forward – and then picking the bike up to go for one more lap, taking an impressive P5.

Recovering and returning Andrea Iannone (Ducati Team) put in a solid run in difficult conditions to qualify in sixth, ahead of the Team Suzuki Ecstar duo of Aleix Espargaro and Maverick Viñales – who both struggled slightly more in the wet conditions of the Q2 session.

Alvaro Bautista (Aprilia Racing Team Gresini) will line up ninth after not only graduating to Q2 but also qualifying within the top ten for the Noale factory, with Loris Baz (Avintia Racing) impressing to complete the top ten, after graduating from Q1.

Pol Espargaro (Monster Yamaha Tech 3) was P11 after a tyre decision switch, ahead of twelfth-placed Hector Barbera (Avintia Racing), with race day however sure to see track conditions change once again – and Sepang International Circuit ready for another spectacular Sunday clash.

'DesmoDovi' reigns wet Sepang for pole number 2 of 2016. Rossi and Lorenzo complete the front row as Crutchlow salvages impressive P5 in a washed out Q2 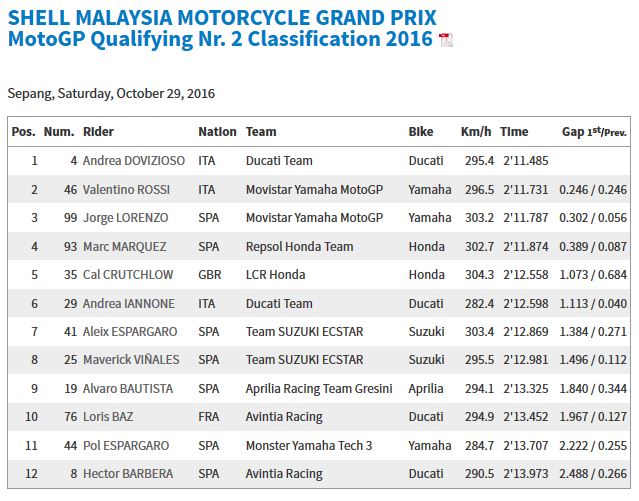 Crutchlow and Baz move through to Q2. Brit blitzes the field as Baz hangs on despite a crash

Cal Crutchlow (LCR Honda) took control of a wet Q1 qualifying session to secure graduation to Q2 early on, then lowering his time further to top the table by a good margin over Frenchman Loris Baz (Avintia Racing). Baz, despite a Turn 2 crash, had done enough before the incident to secure his place in the second session.

Bradley Smith (Monster Yamaha Tech 3) was close to getting through as the Brit comes back from injury, ahead of Jack Miller (Estrella Galicia 0,0 Marc VDS), with the two missing out and therefore set to start P13 and P14 on the grid. Danilo Petrucci (Octo Pramac Yakhnich) heads up the fifth row in fifteenth, ahead of Stefan Bradl (Aprilia Racing Team Gresini), after a crash for the German early in the session. 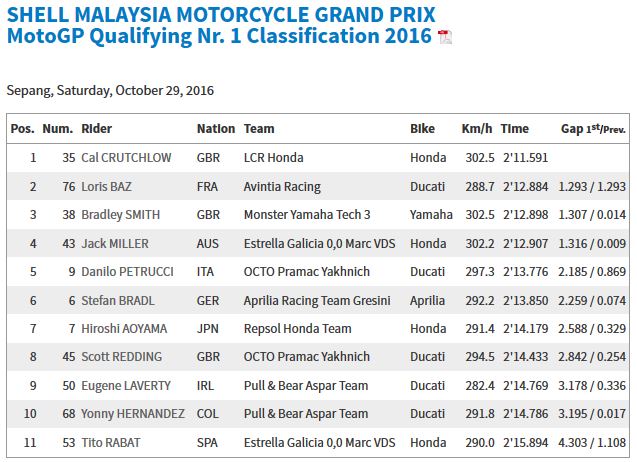 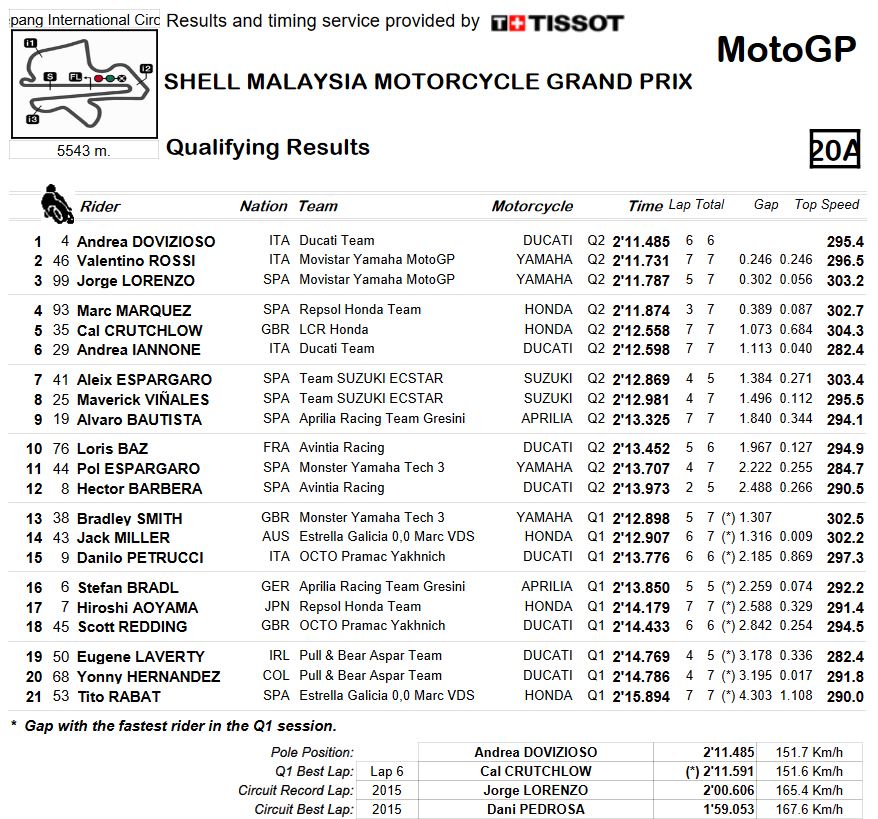