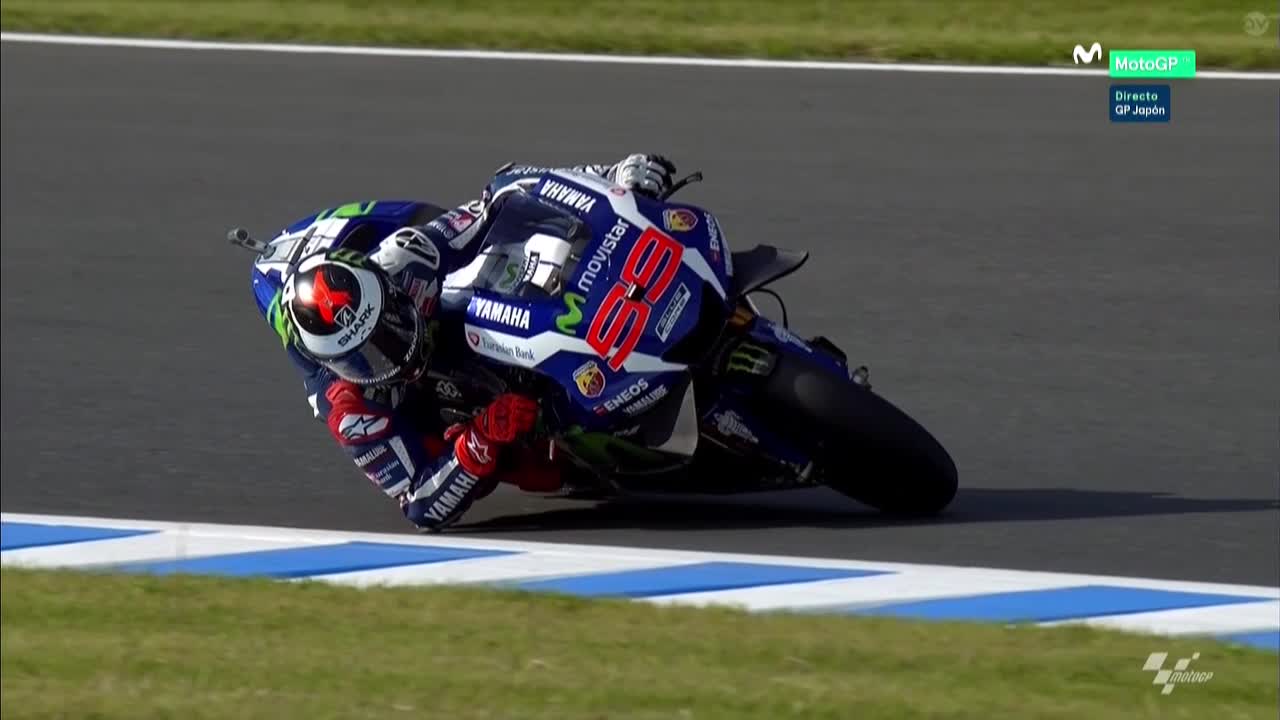 A serie of falls where Dani Pedrosa broke his collarbone.

After Ducati Team’s Andrea Dovizioso led the way in FP1 at the Twin Ring Motegi, skies remained perfectly blue above the Japanese track as the engines fired up once more for MotoGP™ - with Jorge Lorenzo (Movistar Yamaha MotoGP) topping timesheets, from Dovizioso and Team Suzuki Ecstar’s Maverick Viñales.

With the second practice session beginning calmly enough, a spate of crashes in the final minutes of FP2 saw drama wrap up the first day of action as first Marc Marquez (Repsol Honda Team) slid off at Turn 10, before teammate Dani Pedrosa suffered an unbelievable highside at Turn 11. That incident was quickly followed by another for Eugene Laverty (Pull&Bear Aspar Team) at Turn 6 – with Jack Miller (Estrella Galicia 0,0 Marc VDS) sliding off to complete the drama-fuelled session. With attrition rates high, it was the reigning Champion who emerged fastest from the day, as the 2009, 2013 and 2014 winner at the track took over at the top in the final shootout.

Laverty and Pedrosa were taken to the Medical Center for checks following the two incidents, with Pedrosa then diagnosed with a broken right collarbone. The break marks another unlucky injury in the 3-time World Champion’s career, with Pedrosa beginning the 2016 season back to full strength following career-saving surgery in 2015.

Dovizioso had a solid first day as pre-race predictions come true that Motegi looks good for the Ducati on paper. The Italian was also on pole position at the track in 2014, and seems to be a contender to take the honour once again in 2016. Viñales had a messier morning session with some run offs, before pulling it all together in FP2 to top timesheets briefly ahead of ending the day in third on combined times.

Championship leader Marc Marquez (Repsol Honda Team) had one spectacular save on Friday as he pushed himself back upright on his knee, before the final minutes of FP2 saw the 2013 and 2014 MotoGP™ World Champion not quite repeat the feat and slide to a slow stop at Turn 10 – rider and bike ok. His best chance of a clean run at a quick laptime gone, Marquez ended Day 1 P4.

Cal Crutchlow (LCR Honda) had a good first day in the land of the rising sun to complete the top five on combined times, with Aleix Espargaro (Team Suzuki Ecstar) and Valentino Rossi (Movistar Yamaha MotoGP) in incredibly close company in P6 and P7 – the three men separated by only 3 hundredths.

Danilo Petrucci was eighth quickest in an impressive opening day for the Octo Pramac Yakhnich rider, with Dani Pedrosa ending the day in P9. Monster Yamaha Tech 3 rider Pol Espargaro was tenth quickest on the opening day, back on track in Japan for the first time since a win in the Suzuka 8H. 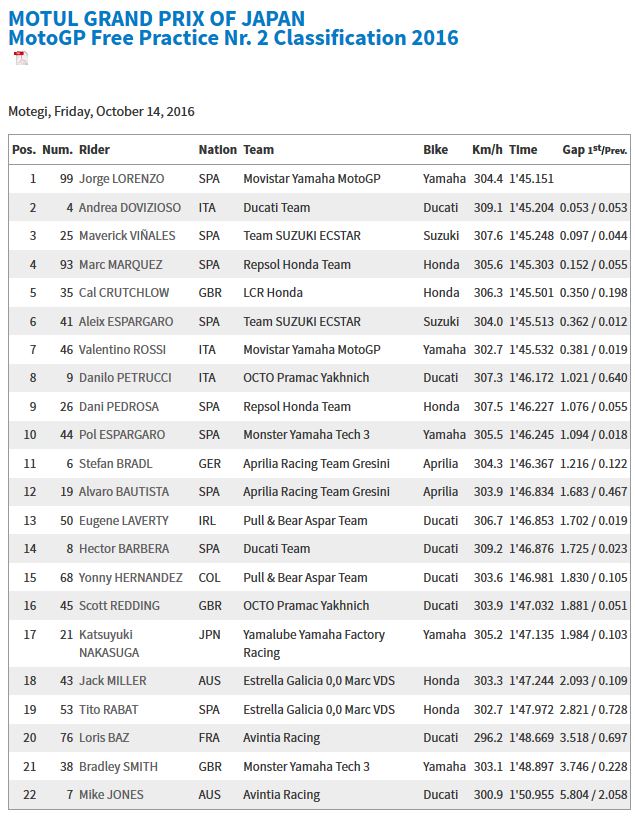 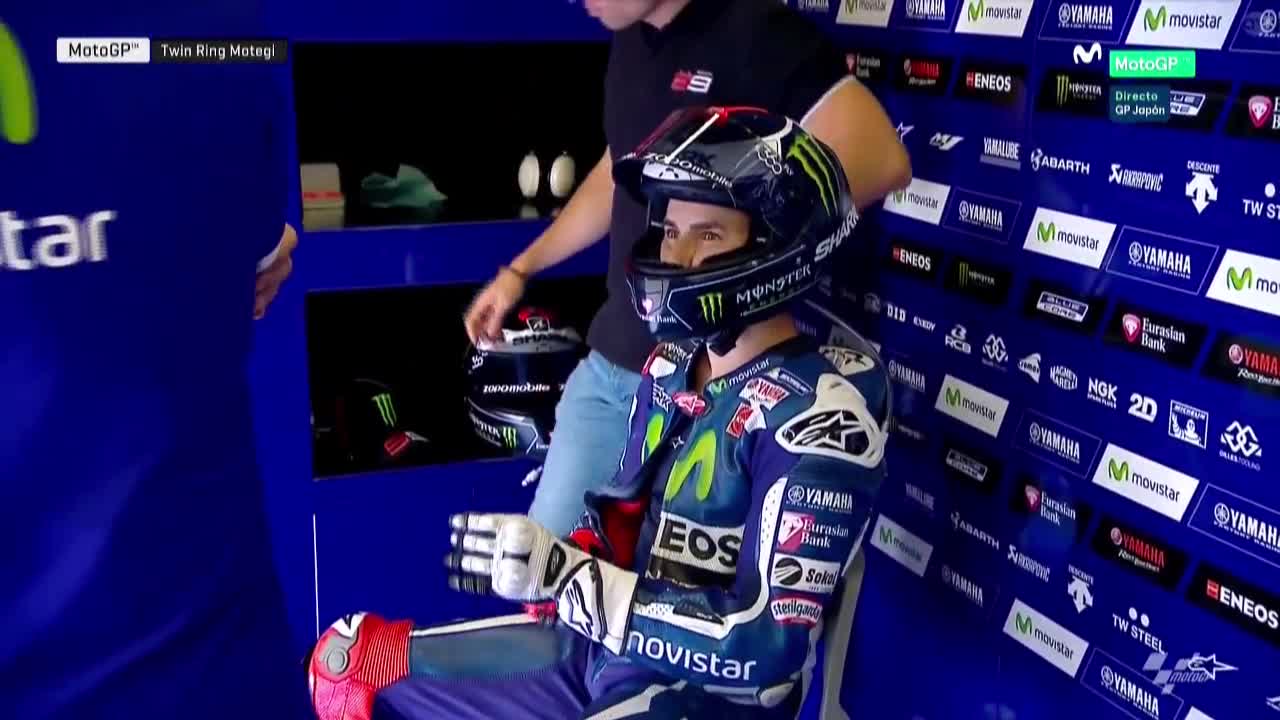 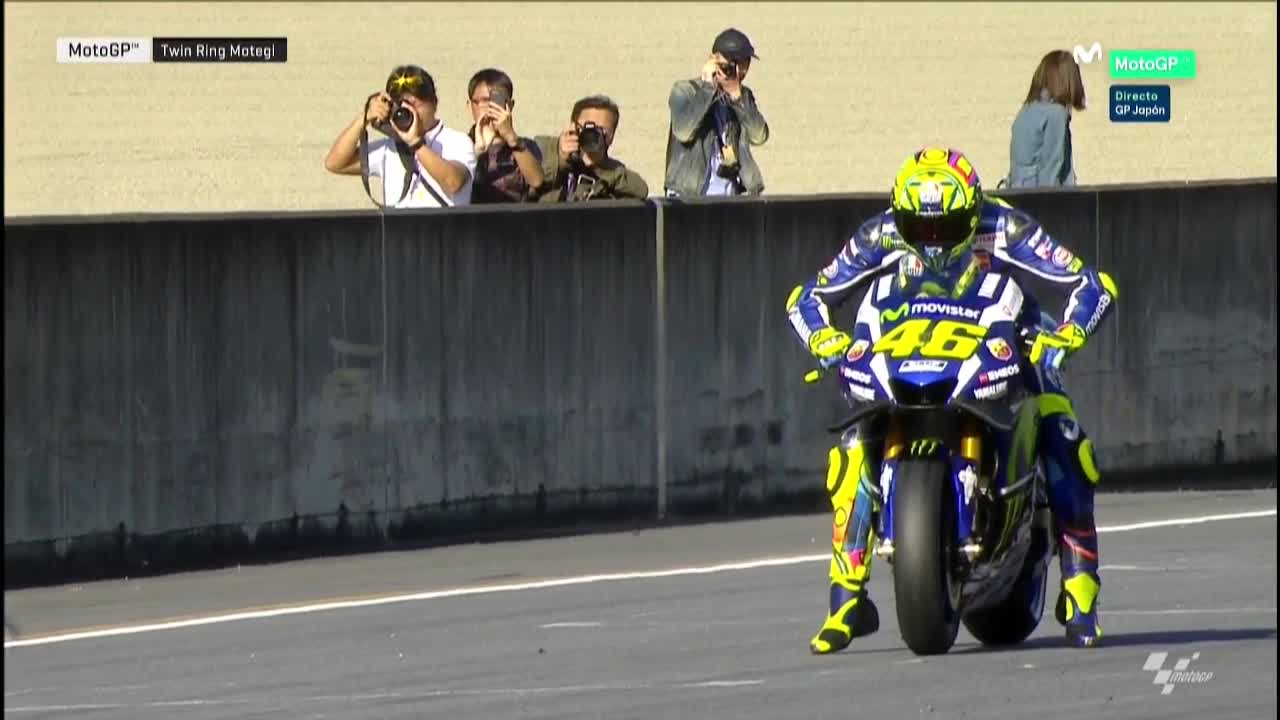 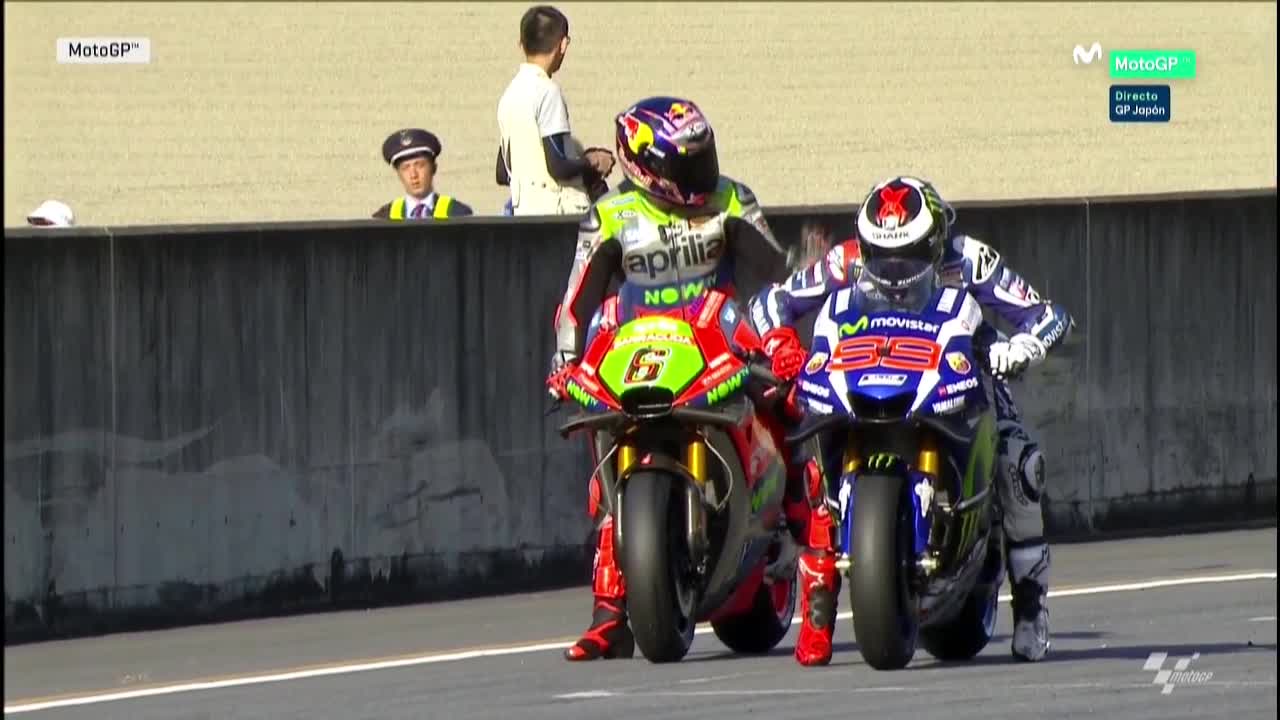 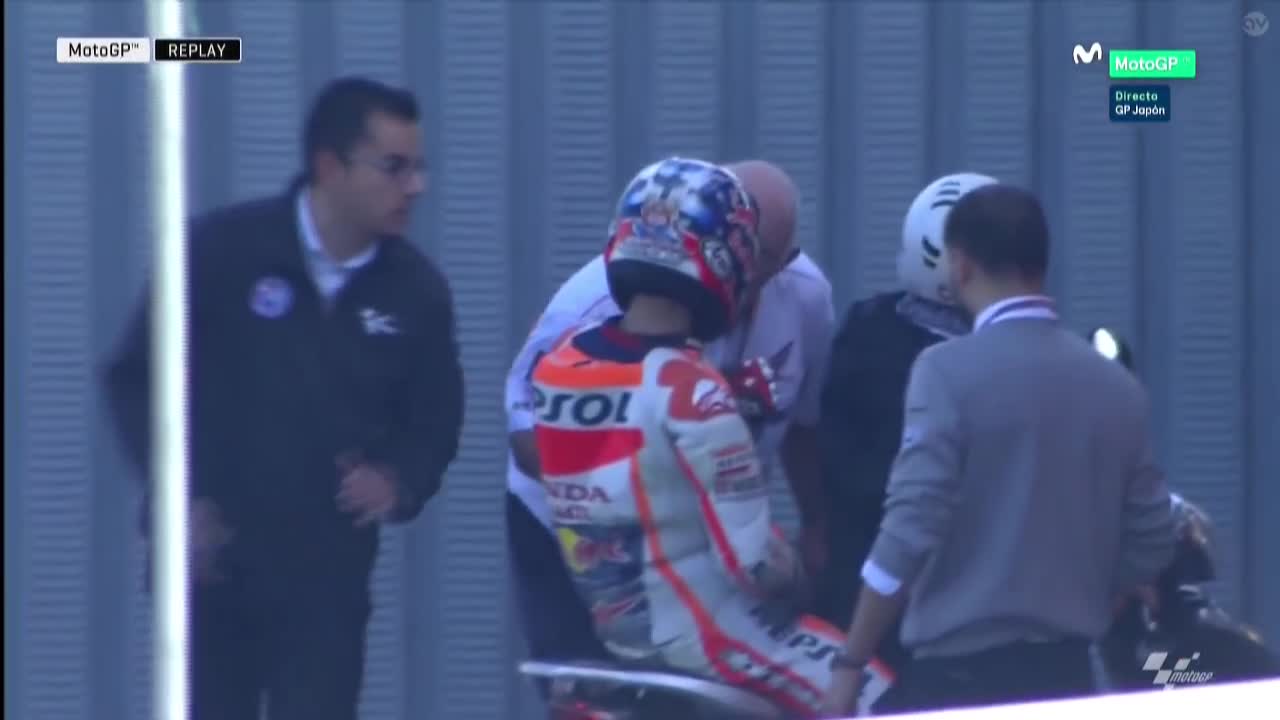 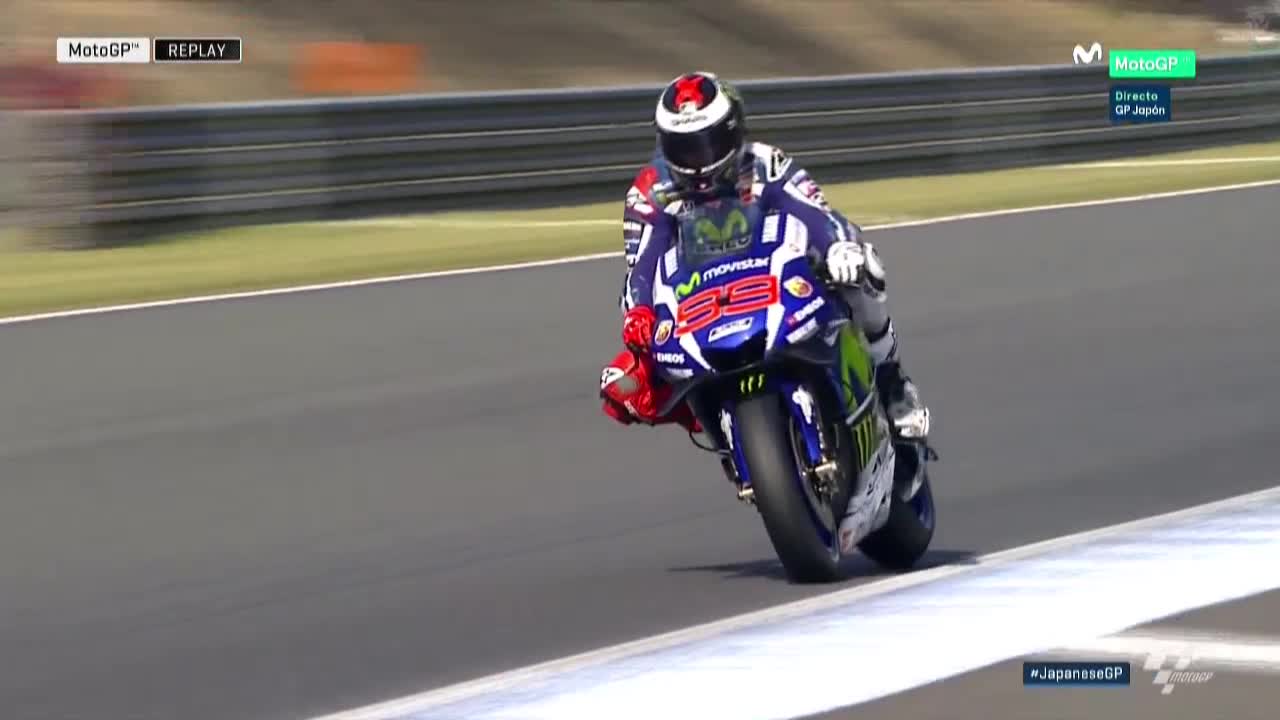 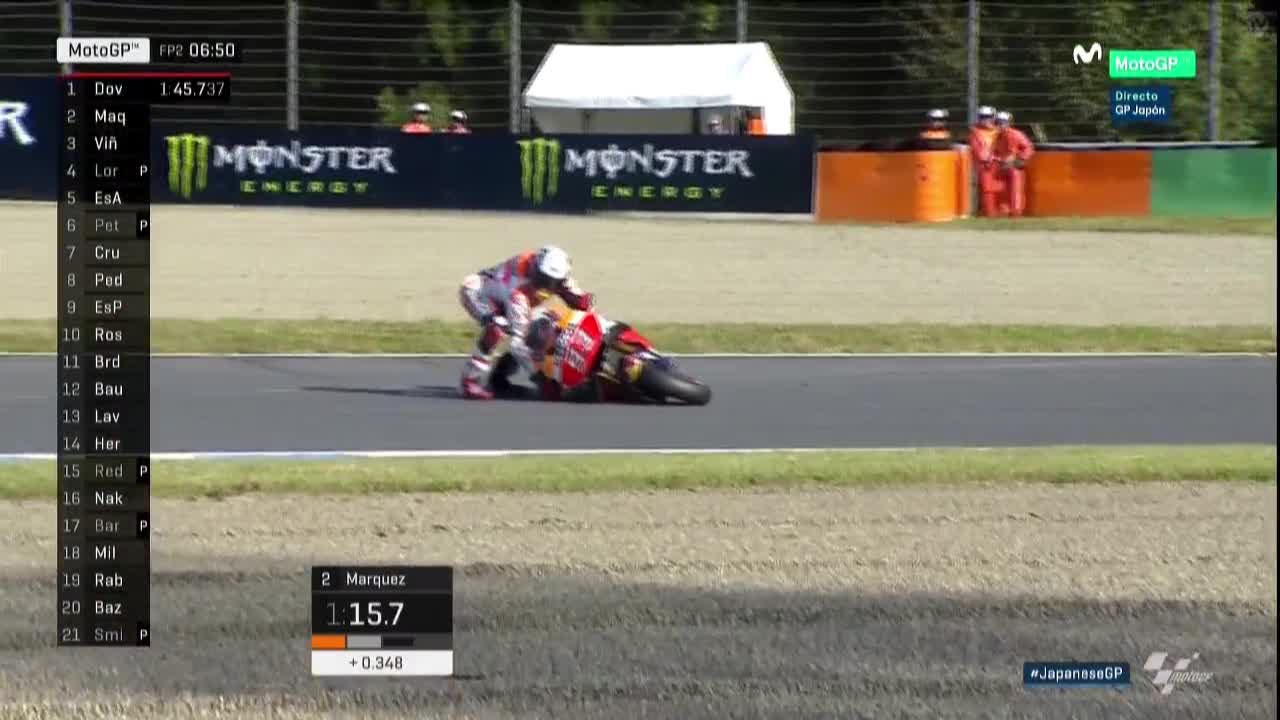