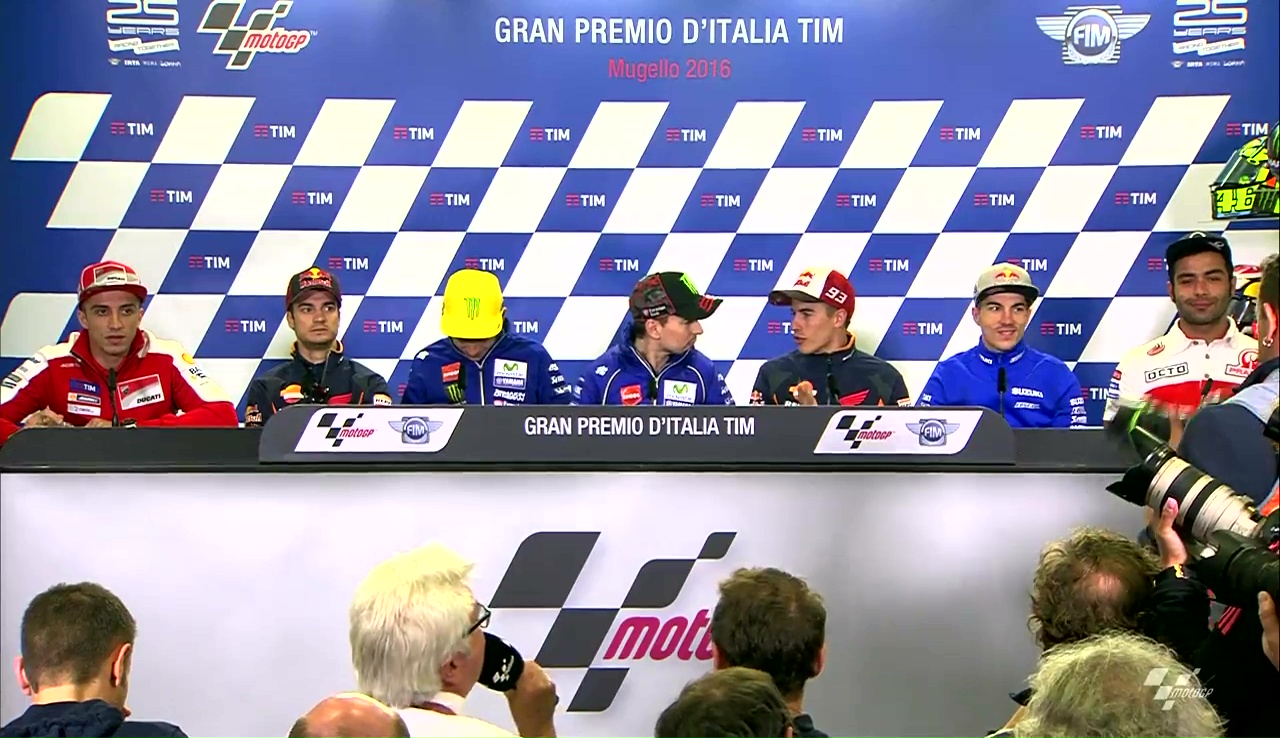 After a week full of 2017 announcements, riders sat down to discuss their future and what the Mugello weekend will hold.

MotoGP™ World Championship leader Jorge Lorenzo (Movistar Yamaha MotoGP) arrives in Mugello with a five point advantage over Marc Marquez (Repsol Honda Team), the pair were joined in the press conference by Valentino Rossi (Movistar Yamaha MotoGP). It’s a big weekend for all three of them in Mugello, especially Rossi whose fans are already filling the hills with yellow. With their World Championship futures secure, Maverick Viñales (Team Suzuki Ecstar), Andrea Iannone (Ducati Team) and Dani Pedrosa (Repsol Honda Team) were also present to answer the press’ questions. It proved to be a busy day for Danilo Petrucci (Octo Pramac Yakhnich) who got the chance to cook and eat a delicious bistecca alla fiorentina during the pre-event before heading to the press conference.

Since 2011, Jorge Lorenzo has only once finished off the top step of the podium in Mugello. The track might be in Italian but it has certainly been ‘Lorenzo’s Land’ in the recent past: “There are tracks where you can find your limits or take more profit from your 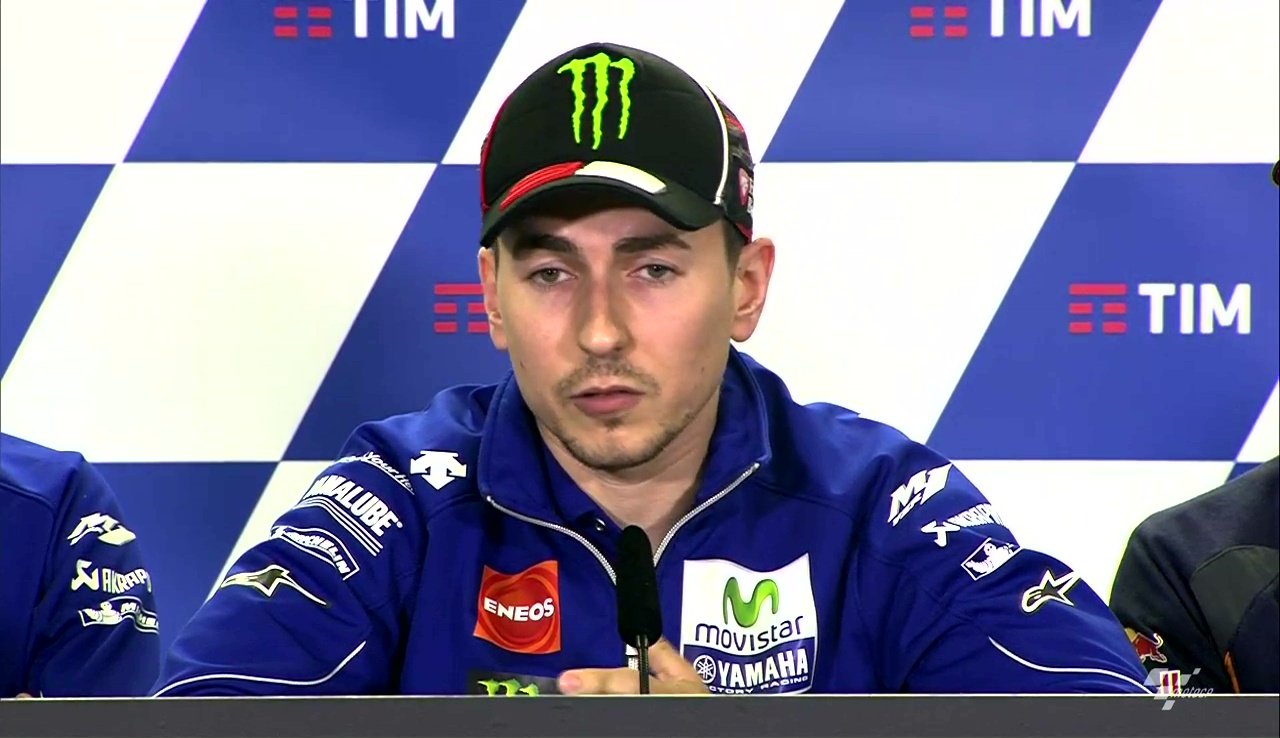 strengths. Mugello is obviously one of these and probably my favourite track where I have had the best results during these six or seven years starting in 2009 with second place and then with some victories and second places. But also the surface and layout of the track is my favourite with a lot of chicanes, it’s not only about the results but also about the way the track is done.”

Lorenzo’s move to Ducati started an earlier than ever silly season, a flurry of riders sliding into place after him: “A lot of movement during the last three or four days. I think it’s good to have Dovizioso as a teammate, for me he has always been a very clever and logical guy and I hear that he’s very good in testing the bike. But for me it would be OK that Iannone stays in the team, he’s very fast and his riding is very similar.”

Marc Marquez has been the only rider to break Lorenzo’s win streak at Mugello, winning the 2014 edition of the Italian GP. But the circuit hasn’t always been kind to him, his other two visits in the premier class ending in the gravel: “Of course we know that we have another tough weekend ahead. Anyway, in Le Mans we suffered a lot but here OK, last year we suffered until Sunday, and then on Sunday we found something that was much better. We will try, we will try again to be there and see how the tyres work here. After the mistake in Le Mans I want to come back with a great race.” 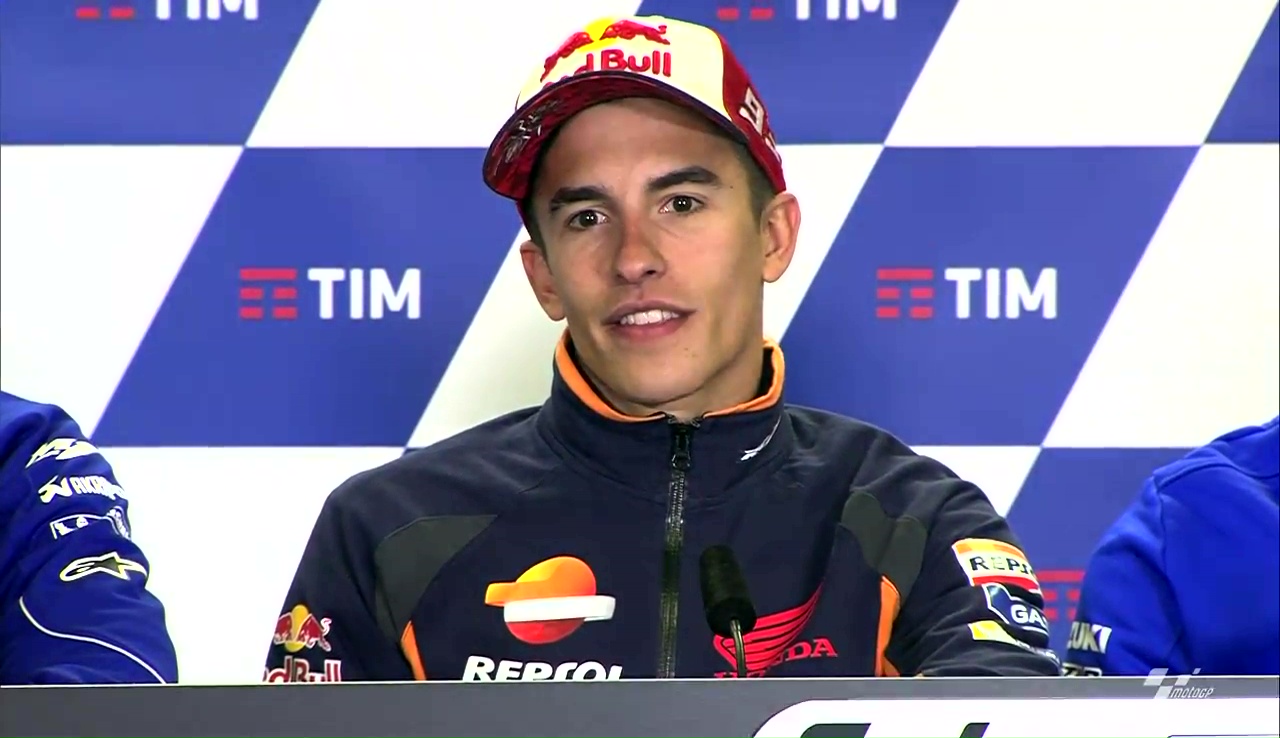 He hasn’t quite signed a contract for 2017 but Marquez remains optimistic that his contract is just on the horizon: “Dani already signed a contract, I haven’t signed yet but I hope it’s close. Looks like we will keep the same team. I think it’s important.”

There’s no one more popular than Valentino Rossi in Mugello, thousands come to watch ‘The Doctor’ dance around one of the most spectacular circuits on the MotoGP™ calendar. Rossi has had a total of nine wins in Mugello, making him the most successful rider across all classes at the track but hasn’t returned to his wining ways since 2008: “Always a special weekend and race here in Mugello. It’s one of the best and the atmosphere is always good. We have to try to be strong and competitive because in the last years I was never fast enough to fight for victory and I never had a good Qualifying.” 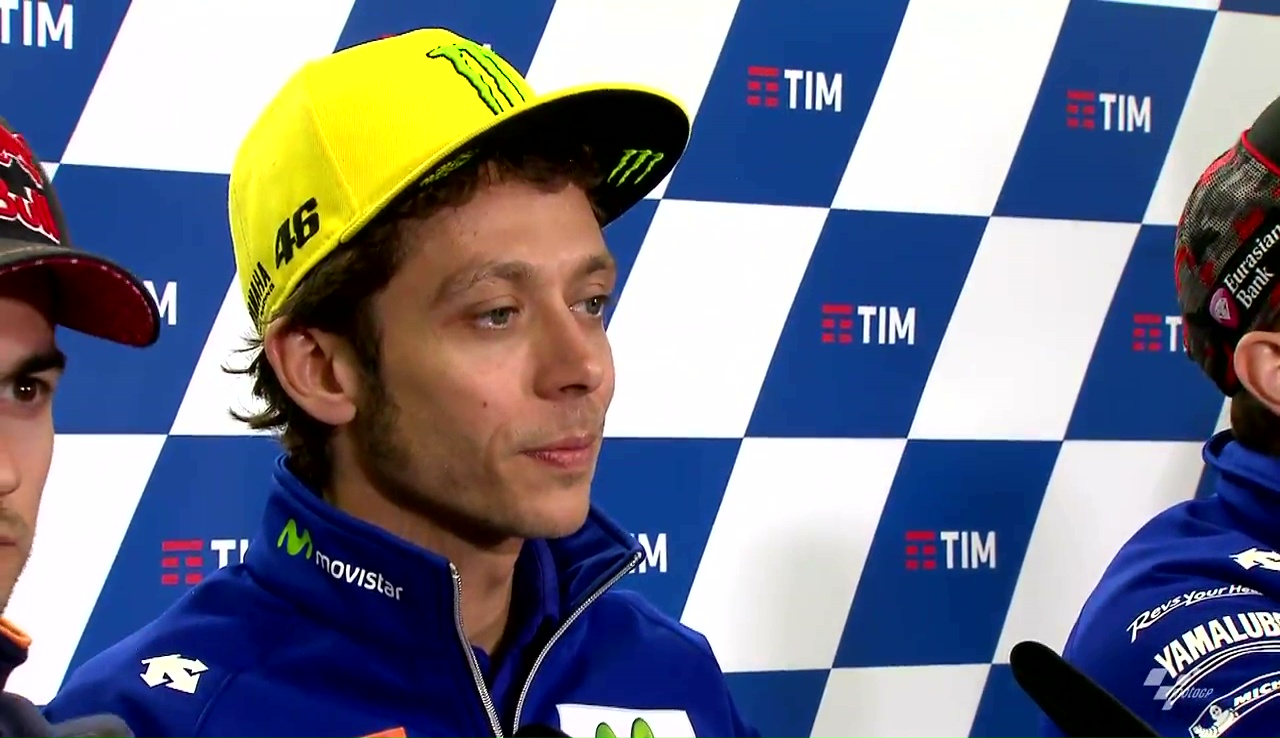 Rossi will again be part of the KISS Mugello campaign, aiming to maintain Mugello’s beautiful countryside: “KISS is very interesting and we will sell the T-shirt for charity, for hospital in Firenze and try to keep Mugello sustainable and clean.”

The paddock had been rife with speculation as to where Dani Pedrosa would land in 2017, but ahead of the Gran Premio d'Italia TIM he revealed he and Repsol Honda would continue their long and fruitful relationship: “It’s true in the last two races there was a lot going on but finally it’s clear. Very happy because it’s been a long long career and I’m very happy to stay. It’s great news because the history is important and at this time with Repsol Honda we’ve been together so long and it gives stability and length. The future is looking good because we have a strong team and we’re always looking for the highest technology in the team.” 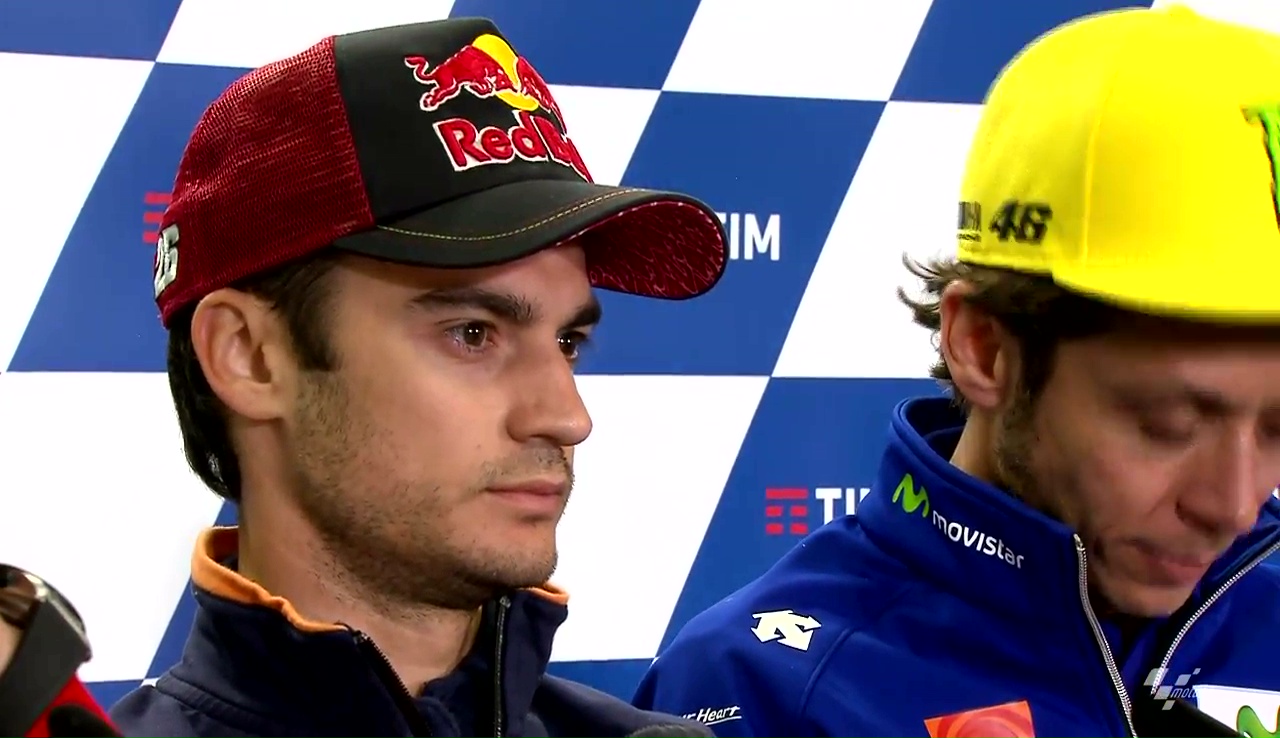 The Italian GP will also be Pedrosa’s 250th Grand Prix start: “It’s true, 250 Grand Prix, it could have been even early because I missed some starts. Still it’s a high number and I’m surprised, in one way it’s positive and in another it reminds me that I’ve already done many races. But I still happy to still be here lining up with these guys.”

Pedrosa’s move set a number of other moves into motion, Maverick Viñales announcing his much anticipated move to the Movistar Yamaha MotoGP team just hours before the press conference: “Finally I decided to move, to go to Yamaha factory and I think it’s a really important part of my career because I will grow up a lot. Finally I am really grateful to Suzuki because they trust me a lot and try to give me the best bike they can. They’ve done a great job.”

With Andrea Dovizioso revealed as Jorge Lorenzo’s 2017 and 2018 Ducati Team teammate, Andrea Iannone will begin a new adventure with Team Suzuki Ecstar in the coming seasons: “After last week for me it’s a big, big change for me because for 2017 and 2018 I go to Suzuki. I’m very happy for this because I think it’s important for me to be the first rider in a factory and Suzuki show a good project. After four years it’s hard and in these four years I lived very great moments in Ducati and Ducati supported me from the beginning in 2013.”

Iannone also revealed he did have an offer on the table from Ducati, but it was not to his liking: “I had the possibility to remain in Ducati but some parts of the contract didn’t satisfy me at 100%. I wanted to change some parts but it wasn’t possible and on the other hand I had a very good opportunity and proposal from Suzuki and for me at the end it’s better to come in this new adventure. But for now I want to focus at 100% in this season.”

Danilo Petrucci took a hard earned seventh place but is aware that a number of fallers helped him out: “I only managed to stay up in the race, unluckily for the other riders there were a lot of crashes and I’m clear that if there weren’t a lot of crashes I would have been 12th. But my target was to finish the race because I missed a lot of time on the bike.”

Petrucci may be missing bike time but he certainly hasn’t lost any of his rumour, taking almost every chance he had to crack a joke or two: “I miss all the riders because I enjoy a lot racing in MotoGP. I miss the riders, the paddock people, the mechanics and even the journalists! It’s like asking which is your favourite nightmare!”

He even managed to see the funny side in his hand injury: “I have a weather forecast station with the hand getting more tense and some pain. But now I can say it won’t rain tomorrow because my hand is full of pain so tomorrow the weather will change so I have to focus on the positives of the injury!” 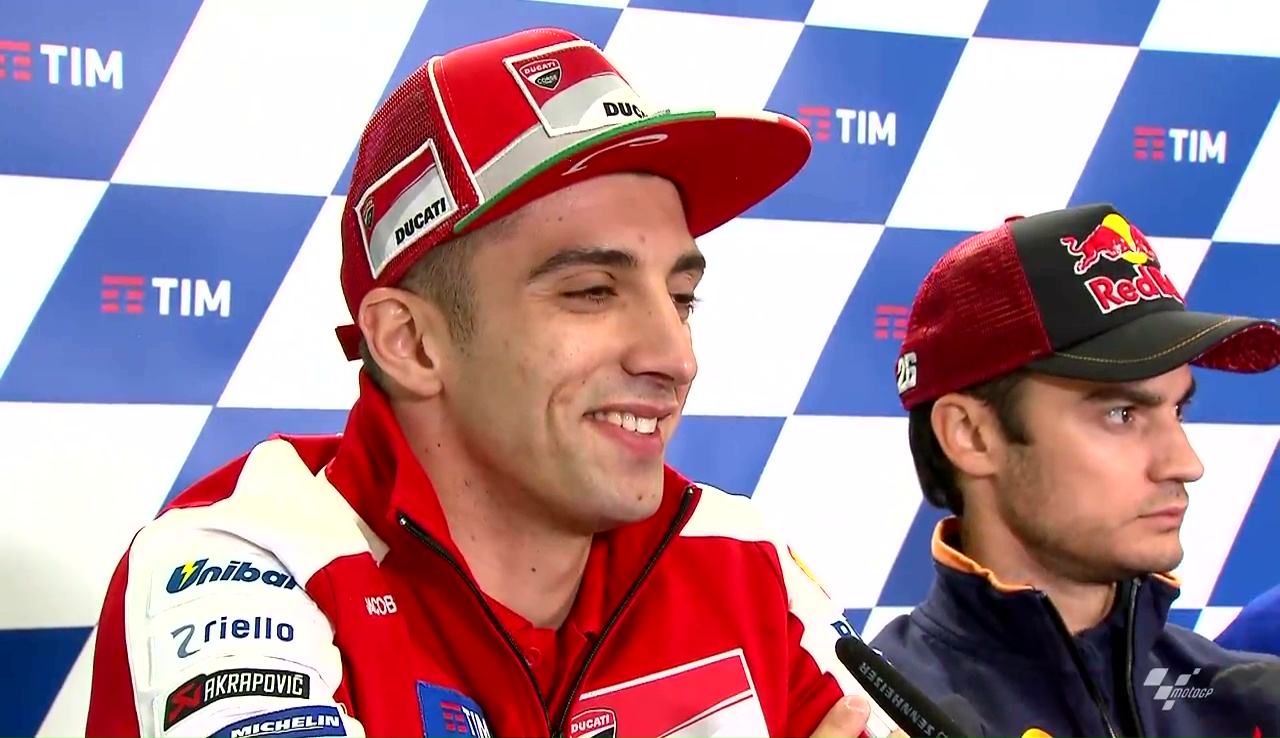 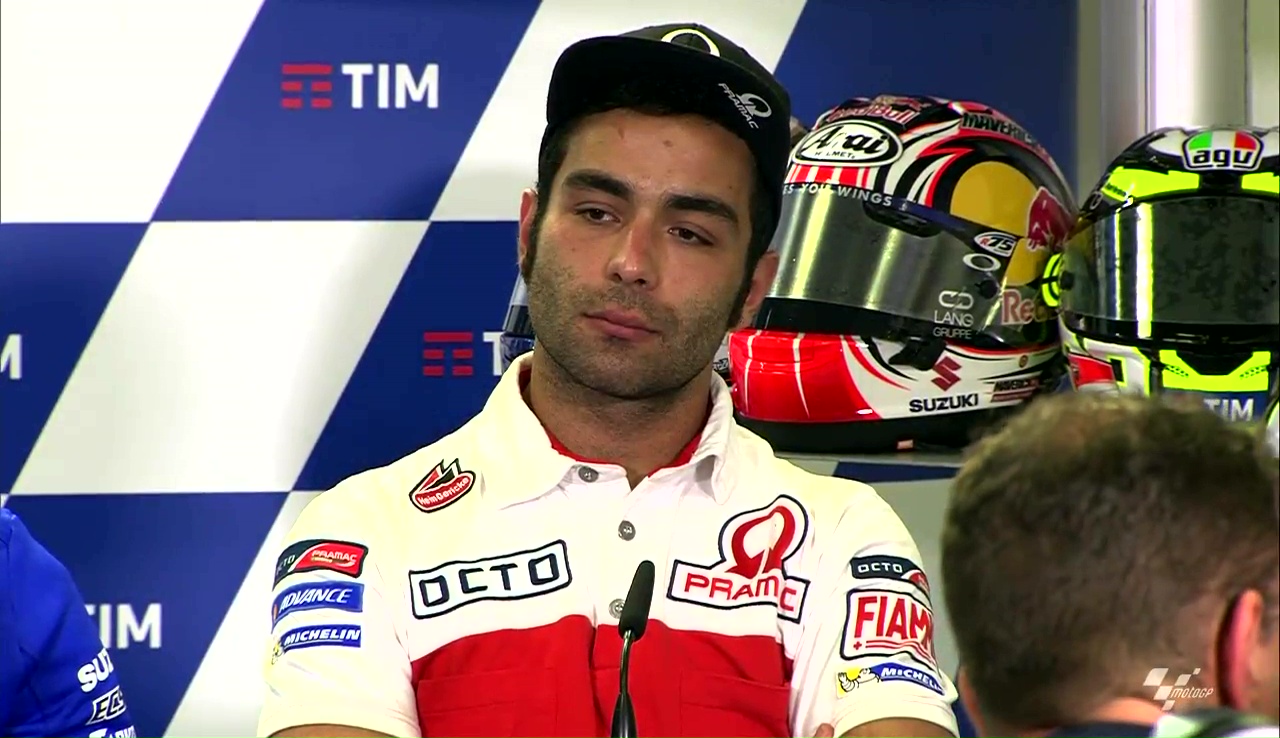 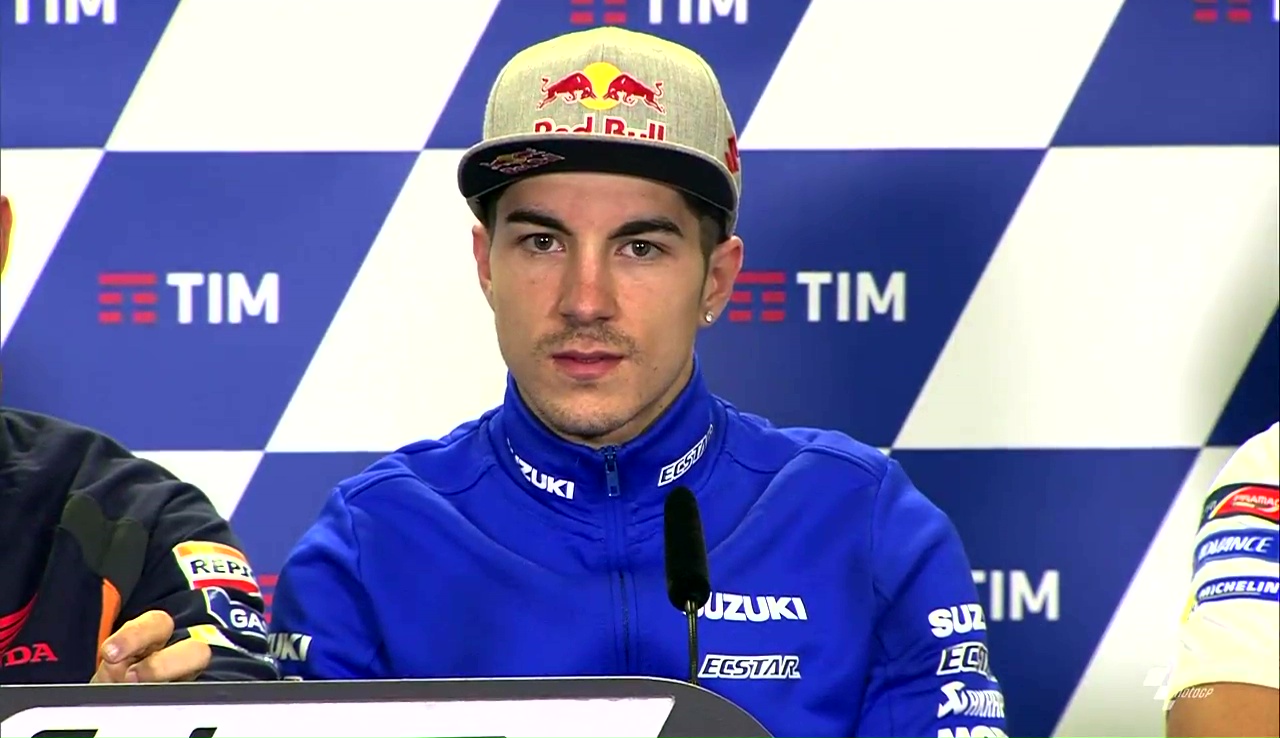