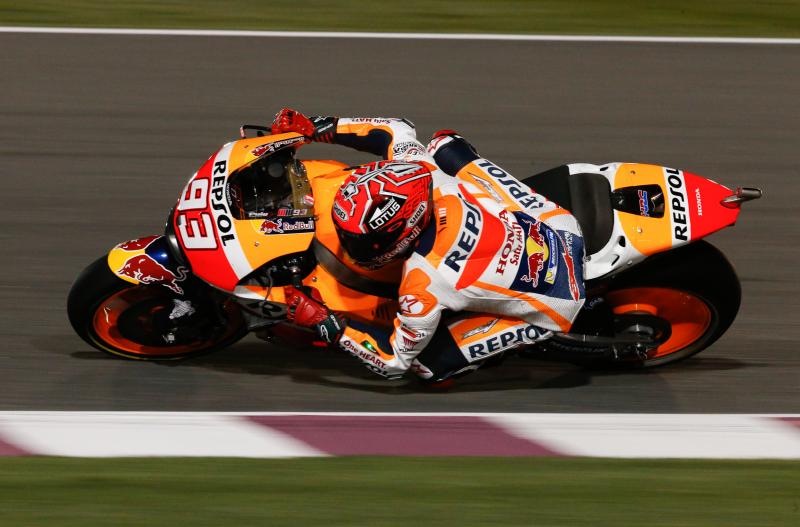 Asserting himself as the fastest man again under the desert floodlights was Iannone who set a 1’54.639 to lead from Lorenzo and Marquez.

After a productive first session, the MotoGP™ World Championship riders went into FP3 ready to fight for the top ten. A top ten finish on the combined times of the first three Free Practice sessions guarantees a direct pass into Q2, now more important than ever as almost every rider on the grid is capable of a single fast lap thanks to the new rules.

But as is almost tradition now, the times truly began to fall in the final 15 minutes. Times quickly dropped into the mid 1’55s until Jorge Lorenzo threw down the gauntlet with five minutes remaining and set a 1’54.776. Andrea Iannone proved to be Lorenzo’s undoing, the Ducati man setting a blistering 1’54.639 to lead the session. Iannone was also able to hit 348.1 km/h, the fastest top speed of any rider in the session. 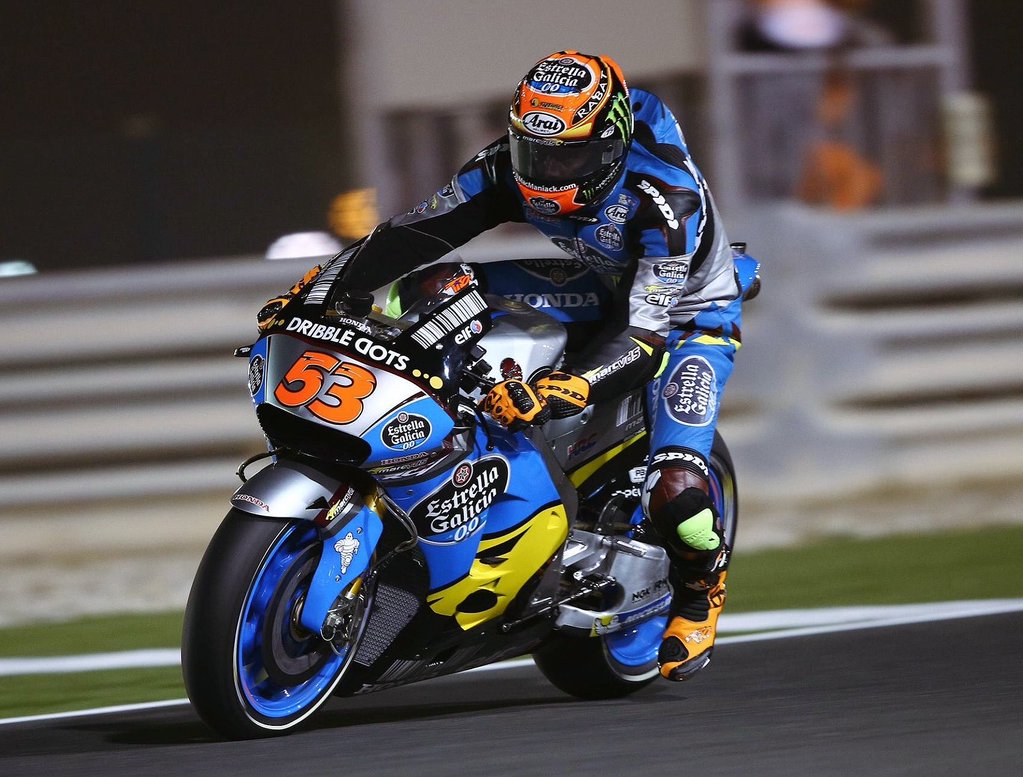 Lorenzo’s 1’54.776 was good enough to conclude the day in second and comfortably advance through to Q2 directly. Unlike his Movistar Yamaha MotoGP teammate, Lorenzo is running winglets this weekend.

Marc Marquez (Repsol Honda Team) was able to overcome many of his and Honda’s problems to set the third fastest time and finish within 0.2s of Iannone. Time are incredibly close in the MotoGP™ field, the new unified Magneti Marelli software allowing more riders than ever to be towards the front.

Both the factory Ducatis are looking strong here in Qatar with Andrea Dovizioso (Ducati Team) ending Friday as the fourth fastest rider. Although he initially struggled to get up to speed in testing, Dovizioso is now showing well and able to push in each session, his 407 laps in testing beginning to pay off.

Maverick Viñales (Team Suzuki Ecstar) was the only other rider to drop into the 1’54s as he set a 1’54.976 to end the day fifth and 0.337s back on Iannone’s time. Throughout the weekend Viñales has been a considerable distance ahead of his teammate, his talent shining through despite this being only his second year in the premier class. 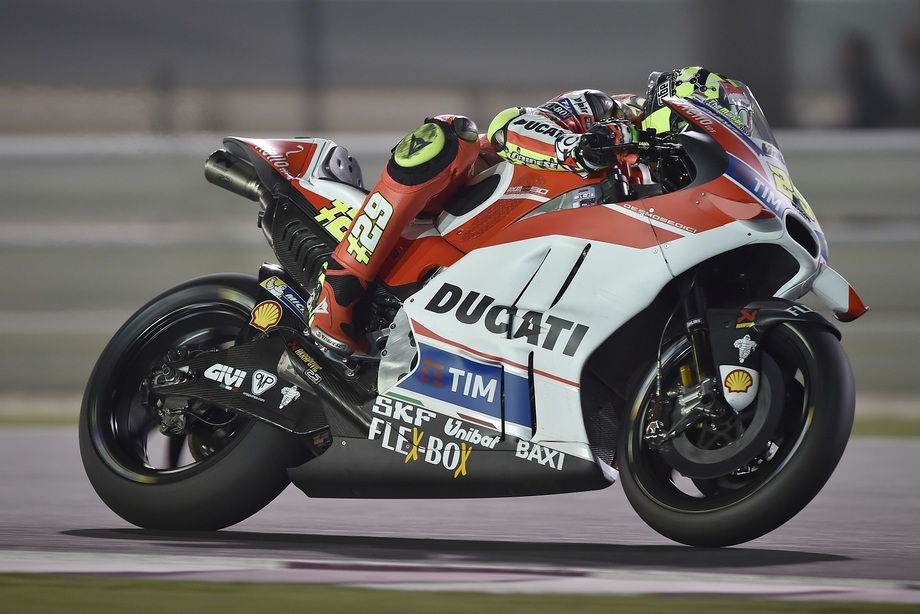 One of the first riders to improve, Pedrosa eventually ended FP3 in sixth and ahead of Valentino Rossi (Movistar Yamaha MotoGP). Rossi was just over half a second behind Iannone’s time as none of the factory riders had a clear advantage.

Disaster struck for Bradley Smith (Monster Yamaha Tech 3) with just over ten minutes remaining as the Brit fell at Turn 6. He was unharmed and able to improve his time, ending 12th. There was also a fall for Jack Miller (Estrella Galicia 0,0 Marc VDS) as he pushed for a final fast lap, the Australian walking away from Turn 9 unhurt. Redding also fell in the dying stages of the session at Turn 13, again avoiding injury.

Due to complications with his injury, Danilo Petrucci (Octo Pramac Yakhnich) has been sidelined for the remainder of the weekend.

Free Practice 4 at 19:55 Local Time will be the next time the MotoGP™ riders are on track, Qualifying beginning at 20:35 Local Time on the same Saturday. 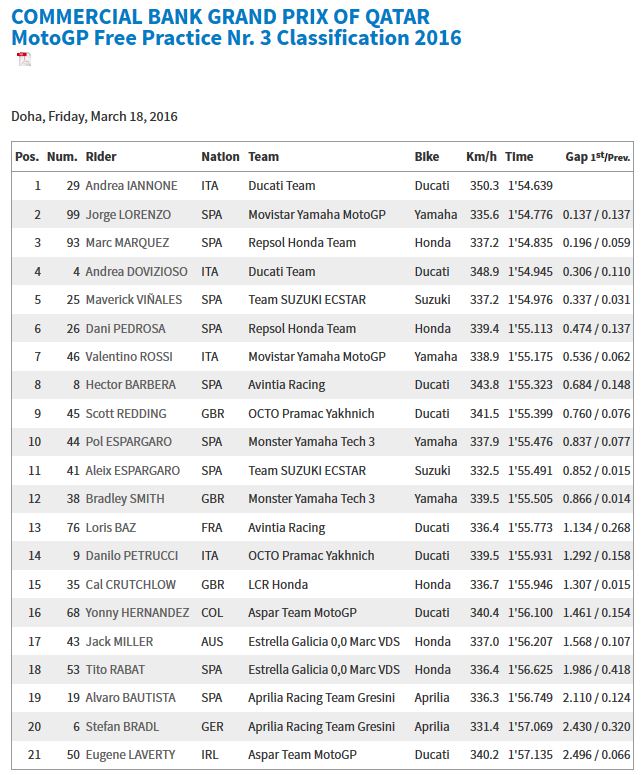