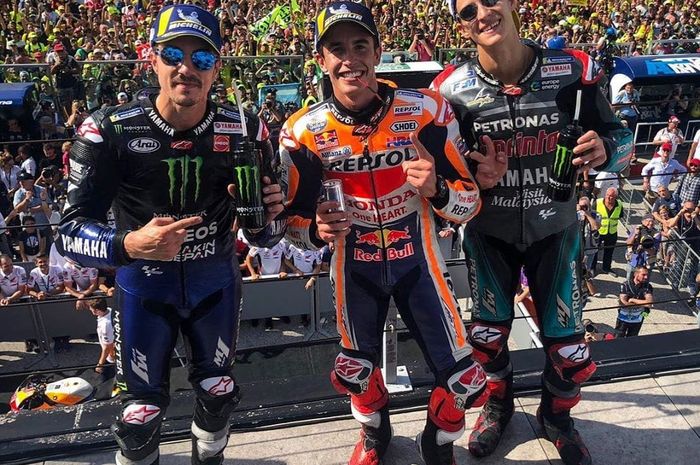 Fabio Quartararo came close to the first victory of his MotoGP career at Misano. He led almost all of the race with Marc Marquez in his wheel, but the Spaniard beat him in the last lap.

Author of pole position, Maverick Viñales made the holeshot to Fabio Quartararo, managed to get out of the grid. Both Yamaha drivers see the opportunity to escape, but we quickly understand that the French is faster than the Spaniard. He passes it and leaves alone in the lead. Alone ? No, because Marc Marquez fills the gap and returns in his exhausts. The Franco-Spanish duo is above the lot and flies away. 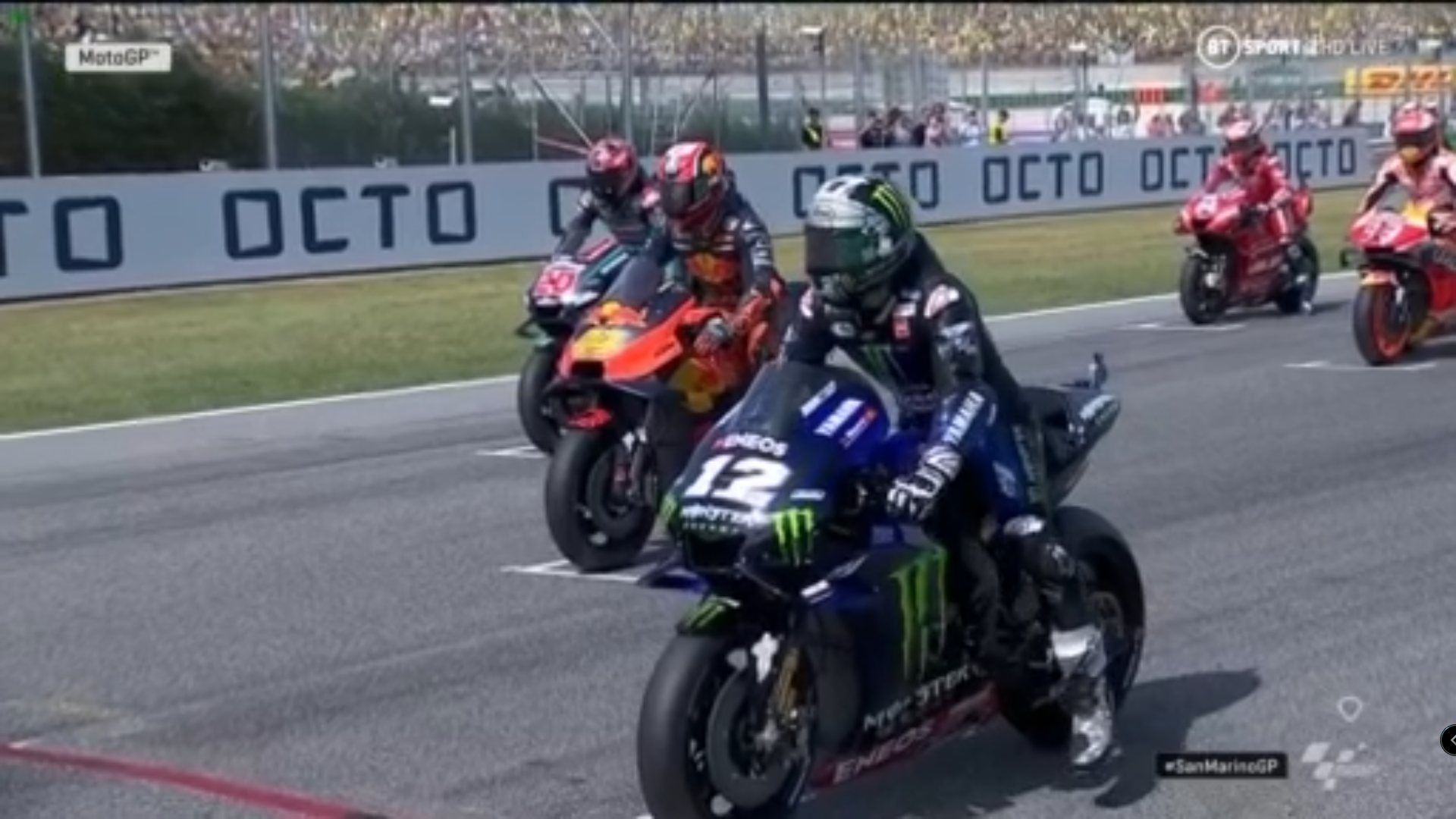 Behind, a group fight for the top-5 and we find in particular Valentino Rossi. The Doctor manages to get rid of Pol Espargaro, difficult to double, and based on Franco Morbidelli well installed in the 4th rank. Meanwhile, Takaaki Nakagami falls, just like Francesco Bagnaia a few minutes later. Incidents that benefit Johann Zarco, poorly started (17th in the first round) and fighting for points.

12 laps from the finish, Alex Rins drops to turn 4 and has to give up, three weeks after his triumph at Silverstone. The Suzuki driver has to watch, as a spectator, the duel between Valentino Rossi and Franco Morbidelli. After a few aftershocks, the veteran finally finds the opening on his young compatriot, ending up 4th. The laps pass and the situation remains stable: Marc Marquez 2nd in the wheel of Fabio Quartararo, with Maverick Viñales in pursuit at about 2 seconds. 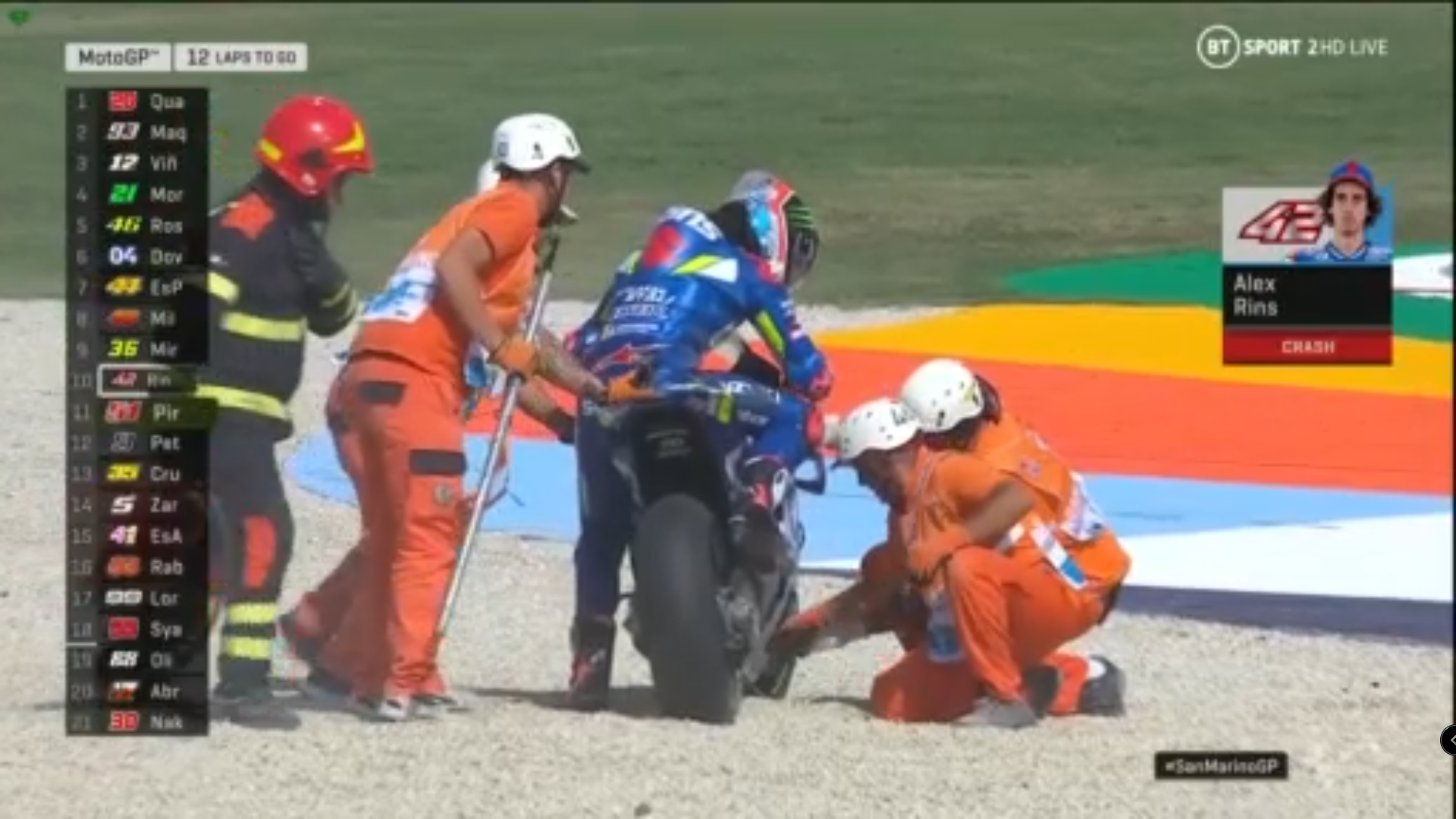 The long-awaited duel begins at the start of the last lap, when Marc Marquez attacks and passes Fabio Quartararo. The Yamaha rider replies and takes control, but his rival at Honda makes him brakes two turns later. It will be the passing of the victory.

In the last fast curves, Fabio Quartararo goes in the wheel of the leader and tries to find the fault, but without success. Marc Marquez wins the Grand Prix of San Marino for the tricolor. Maverick Viñales, Valentino Rossi and Franco Morbidelli complete a top-5 featuring the four Yamahas. 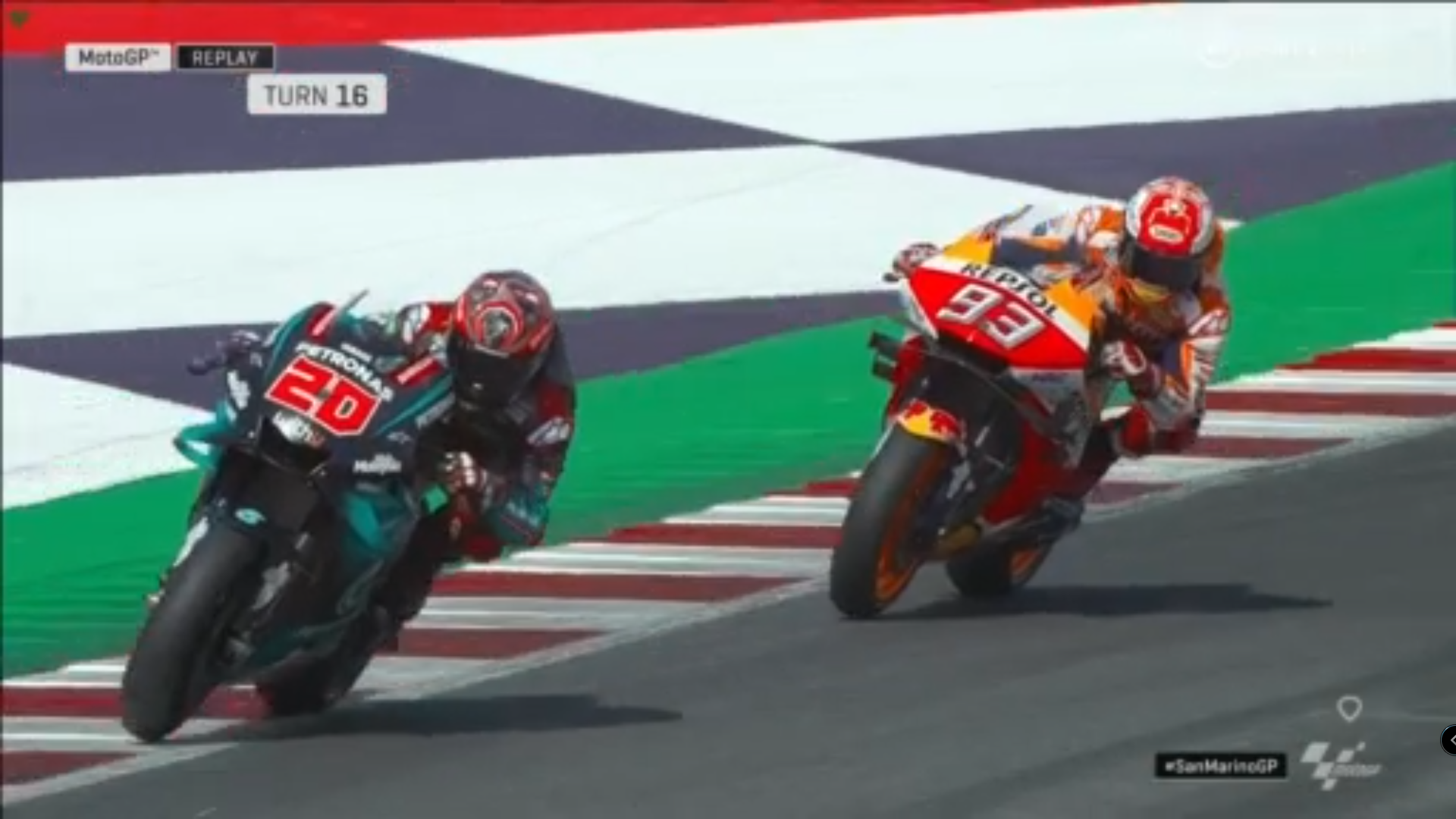 Further back this weekend, Andrea Dovizioso leaves Misano with a 6th place. His team-mate Danilo Petrucci finishes 10th, a result that should not satisfy him. Behind the Italian arrives the Frenchman Johann Zarco (11th), second best driver KTM since his teammate Pol Espargaro crossed the 7th finish. Still convalescent, Jorge Lorenzo could not do better than 14th.

In the overall standings, Marc Marquez's advantage over Andrea Dovizioso grows again: 93 points. At this rate, the Honda driver could be crowned champion at the Grand Prix of Thailand in early October. Danilo Petrucci returns to 3rd thanks to the fall of Alex Rins, back to 4th place. Maverick Viñales confirms his 5th place, synonymous with best Yamaha rider in front of his team-mate Valentino Rossi. Fabio Quartararo doubles Jack Miller for 7th place, becoming the best satellite pilot.