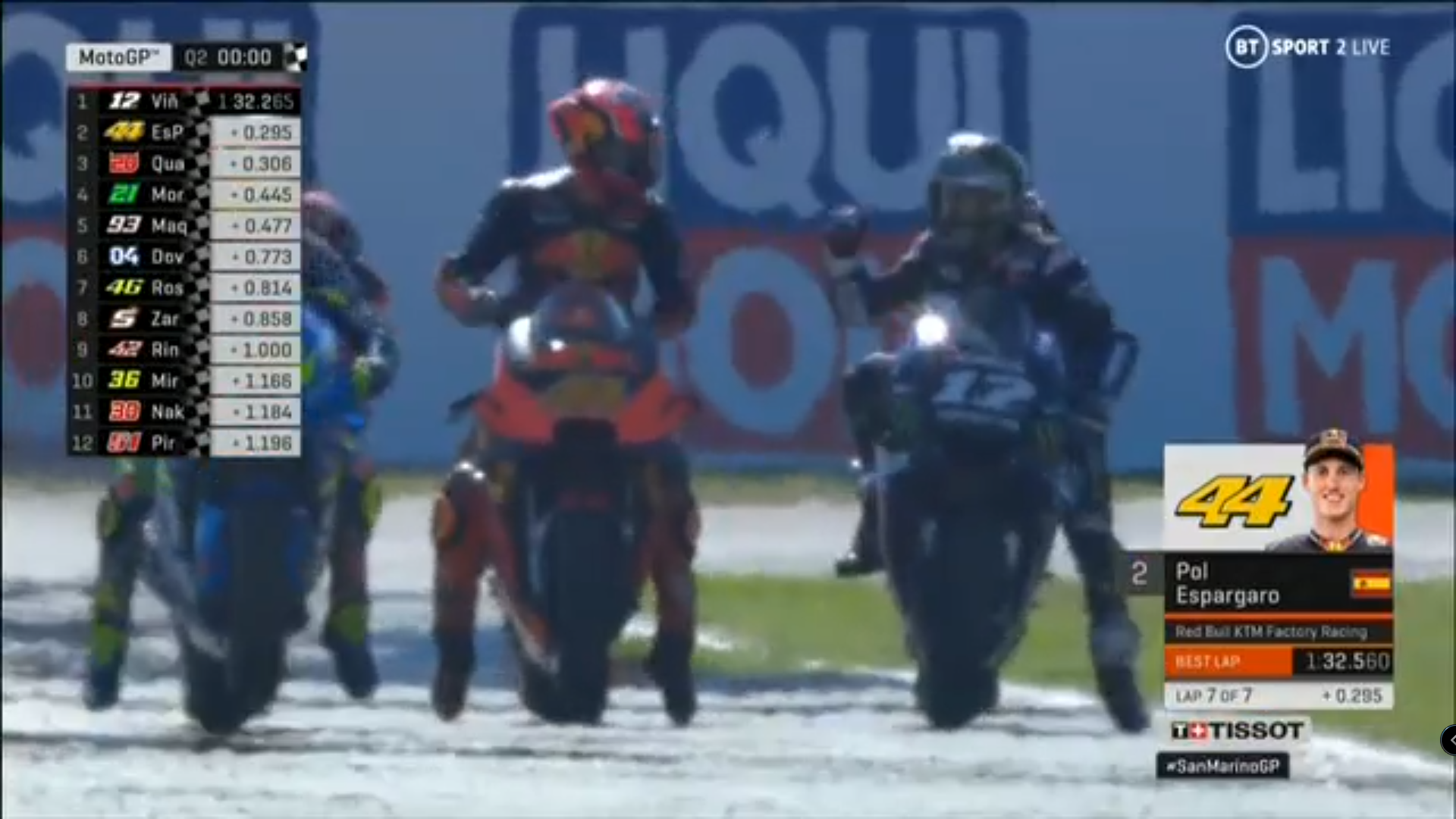 It wasn’t the start of Q2 that Espargaro would have been looking for though, his RC16 stopping at the end of pitlane but, luckily, he was able to get away fairly sharpish with a bit of help from his mechanic. On track, after Marc Marquez (Repsol Honda Team) backed out of his first flying lap, Franco Morbidelli (Petronas Yamaha SRT) was the first to set a benchmark time. However, his rookie teammate would go and set the quickest lap of the weekend despite a mistake in Sector 1 – Quartararo slamming in a 1:32.686 to lead the way. Morbidelli responded to go just 0.024 off but Quartararo then improved to go over a tenth clear, with Marquez jumping up to third on his first quick lap.

Heading into the pits, the top four of Quartararo, Morbidelli, Marquez and Viñales were split by just 0.2 seconds. Home hero Valentino Rossi (Monster Energy Yamaha MotoGP) was sitting fifth ahead of Espargaro, with second in the Championship Andrea Dovizioso (Ducati Team) only 10th. In the pits there was no messing about for Viñales, in and out like a flash and on his first flying lap on the new tyres, he shoved Marquez off the front row to go P3 – an all-Yamaha front row as things stood with three minutes to go.

But there was plenty of nail-biting action to come. Morbidelli was setting red sectors but a huge slide coming into the third split ruined his lap. What about provisional pole man Quartararo? He had Espargaro for company on his final lap but the Frenchman ran onto the green at the fast Turn 11. Quartararo could now only watch as Espargaro continued on his way, a personal best time was incoming but would it be good enough for the front row? You bet! The KTM rider took the chequered flag and went provisional pole by 0.011 – sensational scenes on track and in the KTM box, but Viñales was coming. Red sector after red sector, the man who has been blisteringly fast all weekend crossed the line to go pole by nearly three tenths.

Marquez, shadowing Rossi, was also on for pole. However, after overtaking Rossi into the Turn 11 right-hand kink, the Championship leader ran wide, with Rossi’s lap also going away as the duo came close to touching at Turn 14. And that was that, a second pole of the season went Viñales way after a stunning final lap, with Espargaro jubilant in P2 – his equal-best premier class qualifying position.

A seventh front-row start for Quartararo means he has every chance of leading into the first corner on Sunday, with teammate Morbidelli getting his best Q2 result since the Catalan GP. For Marquez, he had to settle for his worst Saturday afternoon of the season in P5 and lining up alongside the number 93 will be Dovizioso, the Italian doing a good job to claim a second row start after a quiet weekend. Rossi will spearhead Row 3, ‘The Doctor’ has work to do if he is to challenge for a home GP podium, with Q1’s fastest man Johann Zarco (Red Bull KTM Factory Racing) claiming his best dry KTM Q2 finish in P8. Team Suzuki Ecstar’s Alex Rins and Joan Mir – another Q1 graduate – completed the top 10, with Takaaki Nakagami (LCR Honda Idemitsu) and Michele Pirro (Ducati Team) finishing 11th and 12th respectively.

Some big hitters will be starting from way down the order at Misano. Cal Crutchlow (LCR Honda Castrol) will launch from P14, with the Ducati’s of Jack Miller (Pramac Racing) and Danilo Petrucci (Ducati Team) starting from 16th and 17th respectively.

Zarco and Mir advance to Q2. KTM and Suzuki riders will fight for pole at Misano as big names miss out 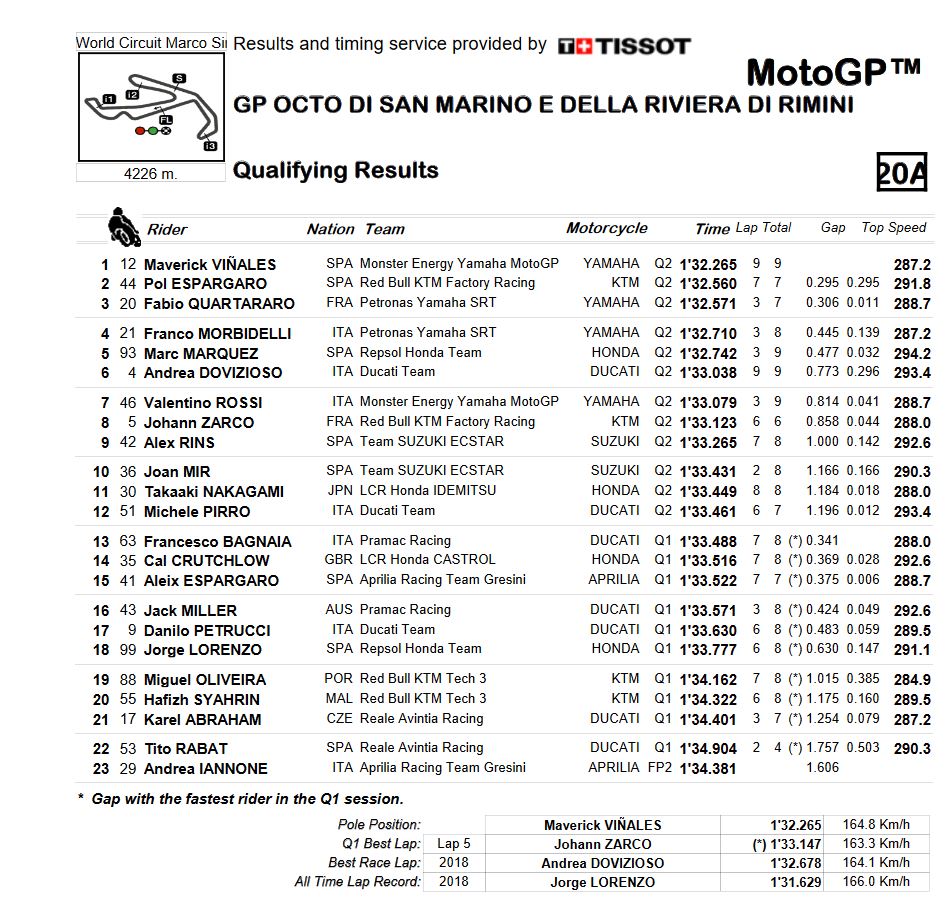