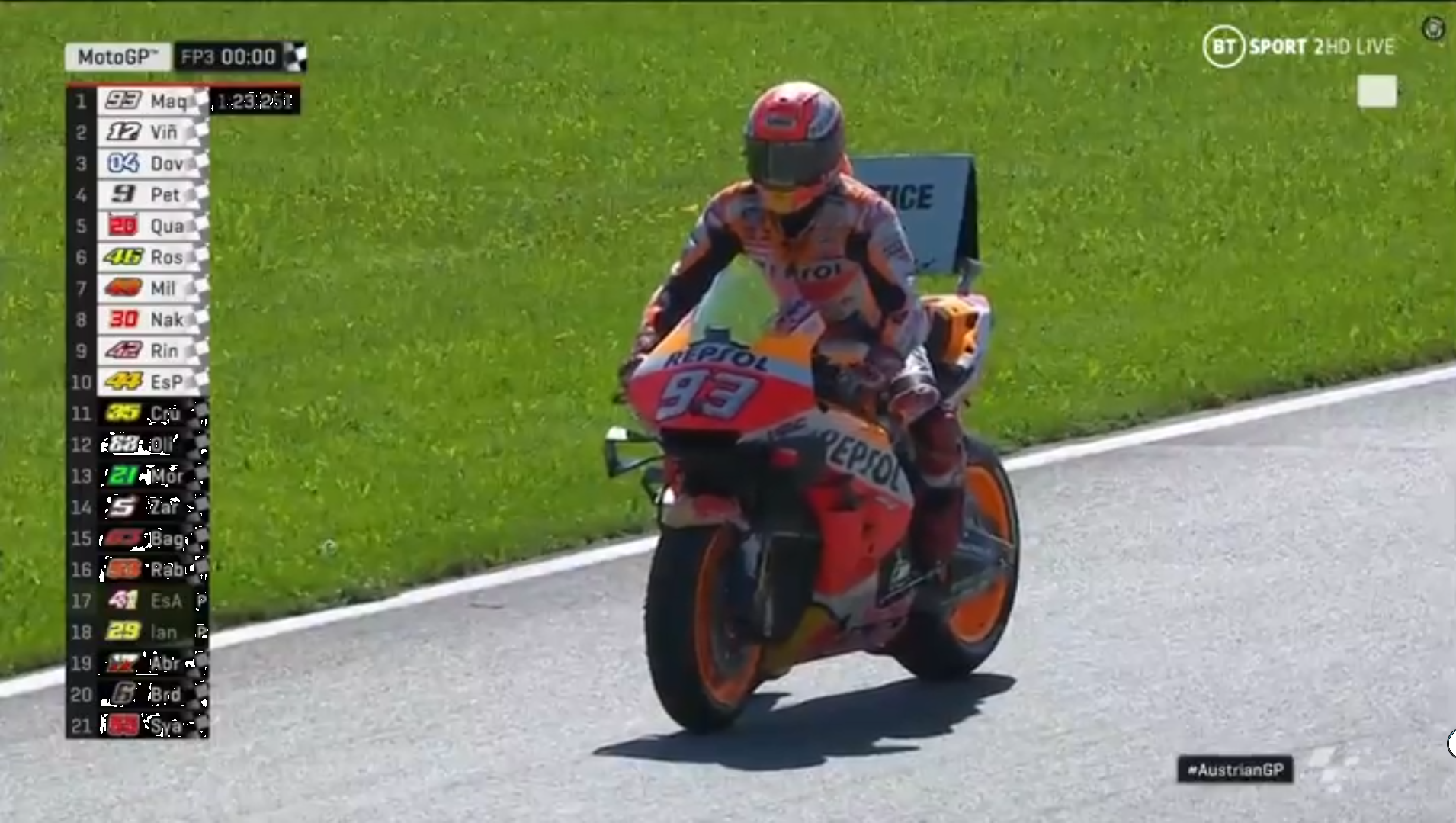 2 Honda, 3 Ducati and 3 Yamaha 1 Suzuki 1 KTM makes the top 10 as the times tumble from Friday to Saturday morning

Marc Marquez (Repsol Honda Team) took no prisoners in Ducati territory during FP3 at the myWorld Motorrad Grand Prix von Österreich as he tops the times thanks to a 1:23.251, a lap that gives him an advantage of 0.340 over second place Maverick Viñales (Monster Energy Yamaha MotoGP), with Ducati Team’s Andrea Dovizioso and Danilo Petrucci setting the same lap time to sit P3 and P4 respectively.

It was the reigning World Champion and a nine-time World Champion who made early moves on Saturday morning in perfect conditions at the Red Bull Ring. Marquez went slightly quicker to set the fastest time of the weekend, with Valentino Rossi (Monster Energy Yamaha MotoGP) getting himself inside the top 10 with a handful of personal best laps. However, there were no other big movers as the riders set about trying to get a better understanding of what tyres they want to use during Sunday’s race.

With 20 minutes of FP3 to go, it was still just Marquez and Rossi who had improved their times inside the top 17, but there would be plenty of changes happening inside the last 15 minutes. With 13 minutes remaining, Viñales was on the medium-medium tyre combination and went 0.033 off Marquez’ time, before the Spaniard shot to the top of the times to go nearly 0.2 faster than anyone. Jack Miller (Pramac Racing) had moved himself up to fourth at this point too, with Team Suzuki Ecstar’s Alex Rins leaping into the top 10 from P12 to go sixth fastest on his GSX-RR.

Marquez was now out on a soft rear Michelin tyre though. The number 93 didn’t immediately set the timing screens alight but, with Miller in his sights, Marquez started to set red sectors. Sure enough, with two tenths in his pocket halfway round the lap, the Championship leader crossed the line to go 0.340 quicker than anyone else. Fortunes weren’t favouring fellow Honda rider Cal Crutchlow (LCR Honda Castrol) though, both he and Rossi found themselves outside the top 10 with just a couple of minutes remaining. Crutchlow was able to go 8th to push Petrucci out, but the Italian then went P3 before Rossi then slammed home a vital personal best time to go 5th, and with Pol Espargaro (Red Bull KTM Factory Racing) also improving, Crutchlow was shoved back out. The British rider couldn’t go quicker and would finish 11th, meaning he’ll have to contest Q1 later today.

So it’s Marquez who is the man to beat heading into qualifying, Viñales and the factory Ducatis are his closest challengers. Fabio Quartararo (Petronas Yamaha SRT) set a late personal best time to leapfrog Rossi as the two Yamaha riders sit P5 and P6 respectively after Free Practice. Miller is seventh fastest, 0.498 off Marquez’ time as P2 to P7 are split by just over a tenth, while Takaaki Nakagami (LCR Honda Idemitsu), Rins and Pol Espargaro make up the remaining automatic Q2 spots – an important result for KTM on home turf. 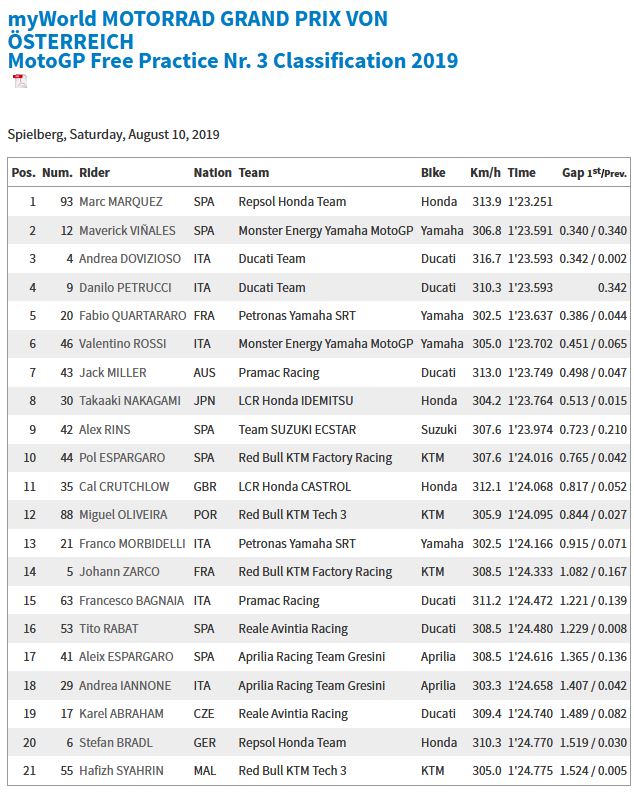