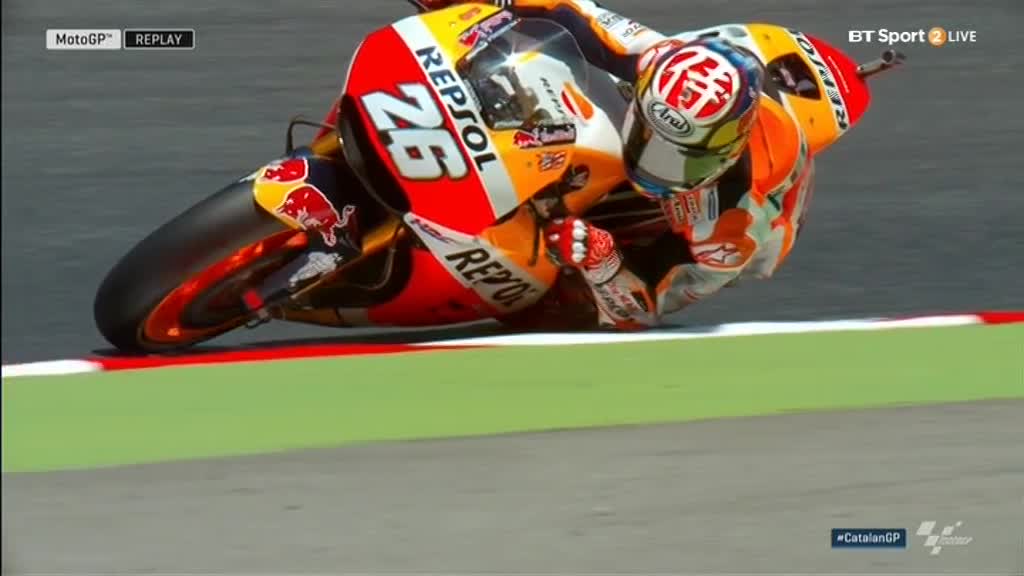 Jonas Folger (Monster Yamaha Tech 3) led the Yamaha charge in Q1 in Montmelo, after all four representatives for the Japanese manufacturer had found themselves outside the graduation zone in FP3.

The German topped the timesheets from Championship leader Maverick Viñales (Movistar Yamaha MotoGP), who moves through to Q2 just ahead of teammate Valentino Rossi after the Italian missed the cut by 0.040 seconds.

The rider from Tavullia will therefore start the race in P13, ahead of Johann Zarco (Monster Yamaha Tech 3) and Jack Miller (EG 0,0 Marc VDS). Another high profile name, Cal Crutchlow (LCR Honda), will start from P17 after a crash in the final minutes. Rossi also had a run off in the session but rejoined the track with no drama.

Sylvain Guintoli (Team Suzuki Ecstar) didn't take part in Q1 due to illness, but is expected to race on Sunday no problem.

Q2: Home run: Pedrosa in a class of his own for pole

Dani Pedrosa (Repsol Honda Team) took a stunning pole position in the heat haze of the Catalan GP, storming clear of the field by three tenths to return to the top for the second time this year. Compatriot Jorge Lorenzo (Ducati Team) shot into second for his first front row start in red - after also proving second fastest on Friday - as two of thehome heroes led the charge. Third was an incredible front row for Mugello podium finisher Danilo Petrucci (Octo Pramac Racing), as the Italian kept his momentum from a stunning home race last time out.

Marc Marquez (Repsol Honda Team) was one of the key headline makers, as the reigning Champion will head the second row but suffered a spate of crashes on Saturday. His final fall in Q2 took him out of contention for pole, with Marquez looking to wipe the slate clean overnight before trying to hunt down the win.

The sun shone more on Aleix Espargaro (Aprilia Racing Team Gresini) in fifth as his impressive pace from the morning continued into Q2, with another home hero just behind him in seventh – Reale Avintia Racing’s Hector Barbera.

The headlines were also thick and fast in Q1, as nine-time World Champion Valentino Rossi (Movistar Yamaha MotoGP) missed the cut only marginally to start P13, ahead of rookie sensation Johann Zarco (Monster Yamaha Tech 3). Cal Crutchlow (LCR Honda) lines up P17 and was another crasher.