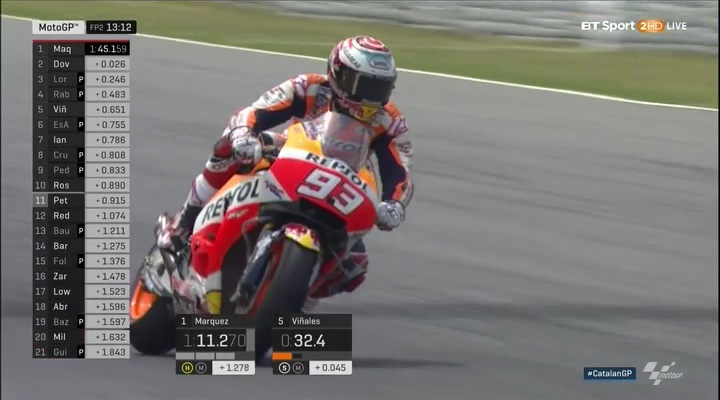 Home heroes: Marquez and Lorenzo make their mark on Day 1

Reigning Champion Marc Marquez (Repsol Honda Team) topped FP1 at the Gran Premi Monster Energy de Catalunya, and the Spaniard kept his throne in the afternoon to go quickest in a dry FP2 and head the combined timesheets on Day 1. The man on the chase was compatriot Jorge Lorenzo (Ducati Team), who shot up into P2 in the afternoon in a strong showing on his race debut at the venue for Ducati. Rookie Jonas Folger (Monster Yamaha Tech 3) impressed to lock out the top three, and ended the day only 0.044 ahead of Mugello winner Andrea Dovizioso (Ducati Team) in fourth.

Bad weather in the morning saw rain ahead of track action leave the circuit in need of full wets, before FP1 was completed on slicks and the sun stayed out to give the field a fully dry FP2.

Behind the top four, Danilo Petrucci (Octo Pramac Racing) was another Italian keeping his momentum from his hometown heroics going, completing the fastest five on Friday ahead of Johann Zarco (Monster Yamaha Tech 3) in sixth.

Seventh was another home hero in the form of three-time World Champion Dani Pedrosa (Repsol Honda Team), with Alvaro Bautista (Pull&Bear Aspar Team) eighth quickest on combined timesheets and escaping unharmed from a slow crash in the final sector in FP2.

Nine-time World Champion Valentino Rossi (Movistar Yamaha MotoGP) was P9 on Day 1 at the circuit on which he won last season – his most recent victory – as teammate and Championship leader Maverick Viñales (Movistar Yamaha MotoGP) ended Friday in sixteenth. Cal Crutchlow (LCR Honda) was another high profile name further down the timesheets, taking P19 after a crash in FP2.

FP3 decides the top ten initial graduates to Q2 on Saturday morning, before qualifying gets underway with Q1 from 14:10 (GMT +2) on Day 2.